Our members get a sense of life in a Burmese village.

Our journey today began with an hour long road trip to a village outside of Mandalay.

Many of the villagers had heard of our visit to their village. As we approached, many of the villagers waved and smiled at our three-vehicle procession. We had a translator with us and some of the older girl advisor/volunteers from the Colorful Girl circles as well. Along the way to the village we saw many of the villagers going about their everyday tasks: Walking oxen to their pastures for grazing, men on bicycles carrying produce, rooster feather dusters and brooms and other bicyclists carrying wood, bamboo sticks, and other construction supplies.

The homes along our route were built of woven bamboo panels for walls, and Palm fronds for roofs. The village has some new businesses — a hospital, a crematorium and two new gas stations.

Cars are luxury items, so we didn’t see many. But many of the villagers have motorcycles and bicycles. There were some two-wheeled carts pulled by a single horse with a driver carrying enormous loads of hay, grass and other produce. Along the route we saw many watering holes where people were bathing or washing clothes, and some watering areas were for animals to quench their thirst.

The oxen are used primarily for working the fields with wooden spikes that serve as rototillers. They drag wooden boards to even out and flatten the soil just before planting. This is the dry season, so no planting occurs during this time of year in this region. The only things being harvested are the crops that were planted at the end of the rainy season. These late crops include plums that look like cherry tomatoes, peanuts, chiles, and some pea roots which are a staple in the Burmese diet. 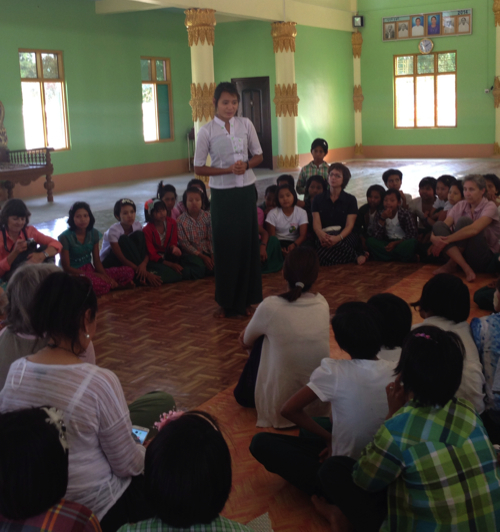 As we approached the road to take us to the school where Colorful Girls Circle meets the scene changed. The road was long and winding with many sections of homes. The villagers have cooking homes and sleeping homes in their neighborhoods. They are very close knit, with some families sharing food and produce, or cooking for one another.

The Colorful Girls Circle here is very present in assisting the girls to step forward and speak openly to their mentor volunteers about issues that come up for girls in Burma (Myanmar). The volunteer mentors are wonderful in encouraging and empowering the girls to speak up, to be assertive and to keep their focus on helping one another. They are also encouraged to keep up their studies. The girls at this school have done so well they placed high in recent math competitions with other schools. The head monk attributes their math successes to the girls self awareness and self esteem in doing better against the boys, as well as the Colorful Girls Circles’ weekly program in the school. We were so happy to hear of this from the head monk, who showed us a video of the girls speaking at a school-sponsored competition. He was very proud of them and now worries about the boys.

After our visit to the school, we played fun games with the girls in the school hall. The games were ice breakers in helping us all unify as one, and to be comfortable with each other. We sat is small circles and talked about what they have learned or have benefitted from personally from Colorful Girls Circles. They mentioned their self esteem has improved , their ability to speak out and ask questions in school has empowered them in a way they were not able to do so before. They also mentioned they are more aware of things like family situations that they cannot improve, and now have a place where they feel supported on a weekly basis. They are encouraged to be active in making their community a better place.

When our circle time together was over we went to the girls’ homes. We were welcomed by their parents and or grandparents and fellow neighbors. They prepared special foods for us at each home. They showed us their cooking huts and sleeping huts. They were gracious and kind inviting us inside their humble homes. Most of the father’s were out working the fields or jobs. It was a very eye opening visit viewing their world and how they live. We were all so grateful to have been allowed inside their homes. Many of the children had never seen Westerners in their village nor their homes. The girls that we met were very sweet and kind and we were warmly greeted by them. Much joy was exchanged throughout our visit. We will not soon forget their warm hearts and smiling faces that invited us into their world and culture.