We were up early for departure from Yangon to Bagan, home to 3,000 Buddhist temples dating back as far as the 11th century. Considered on par with Angkor Wat in Cambodia, these temples are scattered across the plains and create an unforgettable vision.

There are three sections of Bagan: Narayan where the airport is located; Old Bagan behind the ancient gates and where our hotel is located; and New Bagan. Residents of Old Bagan were moved in the early 1990s to New Bagan when it was discovered they were digging up the antiquities near their homes and keeping them rather than turning them over to archaeologists.

This land of temples covers 20 square miles. While it is semi-arid, the Irrawaddy River runs through here from its Himalayan origins continuing to the Andaman Sea. Farmers grow millet, corn, sesame, peanuts and legumes, but the rainy season has passed and only trees and cactus now spot the landscape.

Our first stop was the Temple of the Gray Pavilion. Our climb to the pavilion started on the inside of the temple and ended outside with another dozen steps to the top. There we find a panoramic view of the temples and of the farmers gathering the post-harvest remains in the surrounding fields.

We were fortunate to have arrived in Bagan on a day in which a Novice Initiation was taking place. This is a Buddhist event that is planned after a boy turns 7, the same age as Buddha’s son when he took up the teaching of his father. 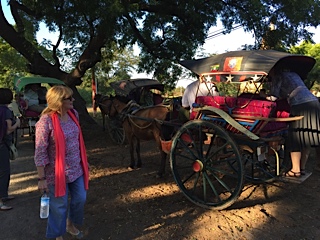 The event included a procession lead by the older male members of the family, all on horseback and dressed in colorful attire. The novice initiate, also colorfully dressed, followed on an elephant. The procession continued with another half dozen groups of dancers, actors, and musicians. Everyone enjoyed being a spectator of this unique cultural event. However, we did not take part in the ceremony or feast for family and friends that followed the procession. The young son is now eligible to be enrolled in a monastery for a period of as short as a week to as long a year.

Our next stop, before lunch, was the “most beautiful temple”, Ananda, built in 1082. Inside, the four Buddhas (Kakusanda, Kawnagammana, Kassapa and Gautama) are represented as 31’ golden statues. The perimeter of the temple portrays the story of Gautama in carved figures set within niches. The tour is a rich history of Buddhism. It took 8 years to build this temple; smaller ones took as little as 6 months to construct.

The evening activity started at 4:00 when we traveled by horse-drawn carts to the Bagan Myaw (looking over Bagan) temple that offers the best view of the sunset. We could climb to the top, stop at a terrace on the way to the top or enjoy it from the base. In any case, we were not disappointed by the brilliance of the sunset.

Our day ended with dinner at a restaurant in a lovely setting on the river.

Helen Belletti of Falls Church, VA, gets ready to board her cart for the trip to the temple at sunset. Photo by Nikki Maxwell