Watching the sunrise over the plains of Bagan from a hot-air balloon, climbing a pagoda — our travelers do it all.

With a free morning at our disposal, most of our group opted to take an early morning balloon flight over the plains of Bagan, the semi-arid area near the middle of Burma, home to nearly 5,000 pagodas built in the 11th to 13th century. Eight of us filled up a balloon and watched the sunrise while looking down on scores of temples below. The sight was magical for us and the dozen or so other balloons riding the breeze. 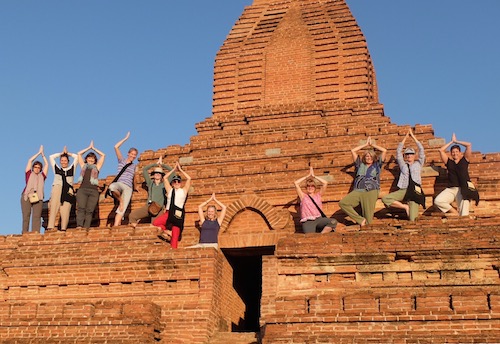 Our travelers reach the top of one of the pagodas. Photo by Patricia Andersson

From watching the balloons inflate after a pre-dawn breakfast to toasting with champagne upon the return, the ride has been a highlight for many so far. The rest of the group took a bike ride, wandering the many dirt paths, and were thrilled to stumble into a small village where lacquerware was made.


They were befriended by a man, his wife and small daughter (at about 4 years old already dressed in the pink robes of a novitiate nun) who showed them around, and of course our bike riders were happy to buy a few things from his small shop, seeing exactly who would be benefitting from their purchases.

The rest of our day was spent touring some of the more important pagodas in the region, with our tour guide, Win, providing excellent commentary. We visited two of the best-preserved temples that contained original paintings on the walls and ceilings, with a kind of Burmese Sistine Chapel feel to them. The paintings told the story of Buddha’s life, and were used by the kings to teach the illiterate villagers about Buddhism through pictures.

Another large pagoda we visited was also home to the small Temple of 37 Nats, which are spirits still worshipped by some that are believed to bring health and wealth. Left over from ancient animistic beliefs, this Buddhist country tolerates the side-worship of these spirits that are celebrated with much singing and dancing.

We saw a statue of one of the first, original Nats, known as Mr. Handsome (love it!) who — as is true for all Nats — was a real person whose death was violent or caused by a natural disaster. Having died so, his spirit must now be kept happy through offerings. While Buddhism is by far the dominant religion in the country, animism still flourishes in small pockets, particularly in rural areas.

We ended our day climbing a brick pagoda with wonderful views to watch the sun set. Many of us made it to the top, employing rusty rock-climbing skills to scale a degree of incline that would be surely off-limits in the United States.

Looking out over the 20-square mile area that Bagan encompasses, pagodas dotting the landscape as far as the eye can see, we watched the sun sink below the horizon, slowly turning the bright gold spires to black silhouettes. The next day we would leave this beautiful land for Mandalay, filled with stories and images of more pagodas than one would have thought possible, thankful for the chance to have visited this unique and special place.