Change meets at the top down and bottom up

No one effort or approach can change the world. Abiding change comes when the governance at the top meets the advocacy and grassroots efforts at the bottom. Marsha Wallace explores three examples of new efforts driving change.

“Closing the gap in gender equality is the unfinished business of the 21st century.”
— Hillary Clinton

International Women’s Day, is the one day each year devoted to promoting and celebrating women’s economic, political and social achievements globally. Various organizations have their own themes or campaigns tailored to their own interests and contexts. But the UN theme for many years has been equality, a goal DFW shares. We know that real progress in the fight for equality for women takes more than shining a light on the issue on one day a year. Ultimately, the broadest global change for women and girls will only be achieved by the concerted and unrelenting effort of NGOs, governments, social entrepreneurs, traditional businesses and private citizens working from the bottom up and the top down.

Dining for Women’s funding of grassroots programs that have the potential to transform women’s lives, their families’ futures and their communities is a bottom-up approach to social change. It’s satisfying to learn about the outcomes women and girls experience. They find their voices and become self-determined, self-sufficient and connected with other women in their communities.  They find a sense of belonging and acceptance they may never have experienced previously.

“Poverty is not about having no money, it’s about NOT having the power to change your own circumstances.”
— Ritu Sharma, founder, Women Thrive

Our goal of gender equality requires both top- down and bottom-up approaches. Top-down change comes from a state, national or global level. Governments, with their ability to write and enforce laws, impose punishment and offer benefits for socially acceptable behavior, are major drivers to promote change. They provide the “societal scaffolding” that supports initiatives at the grassroots level. For example, if when harmful practices like FGM or early marriage are illegal, it strengthens the efforts of those, like many of our grantees, to fight in areas where the practice continues.

These two approaches to positive change are not mutually exclusive. Together they create a positive feedback loop that can lead to effective results. Bottom-up approaches to social change can enable and empower people to press for change themselves.

That is what happened in Nepal where a government action and a grassroots movement came together to eradicate the practice of indentured servitude, called Kamlari. 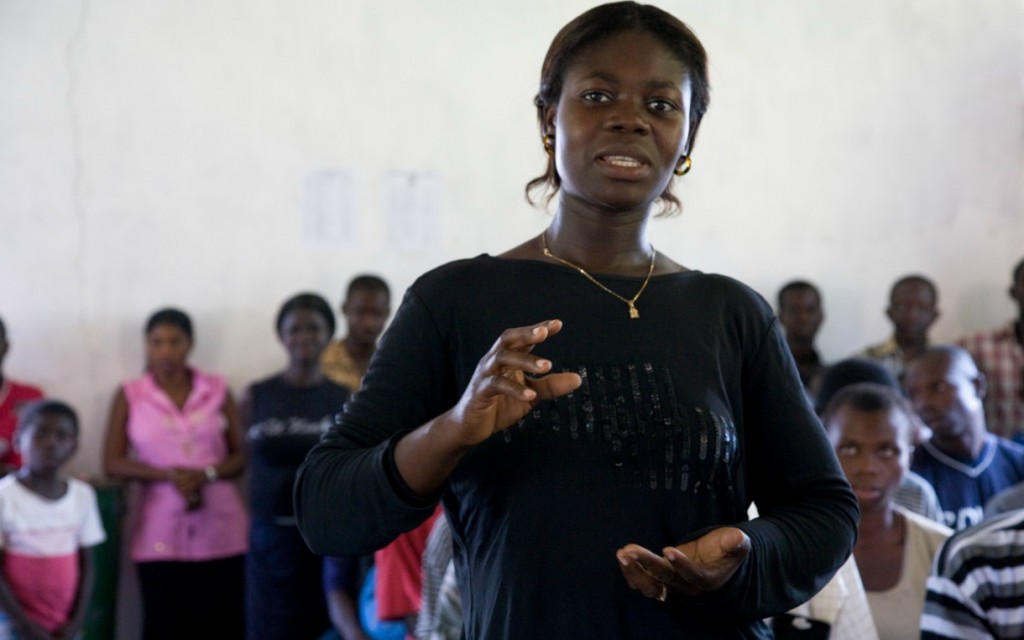 Emilia Amoateng, one of the leaders of the Concerned Farmers Association of Teberebie, speaks at a community meeting in western Ghana in 2009. Community members relocated to make way for gold mines in Ghana, and especially women, struggle with loss of agricultural land, unemployment, and environmental damage. Photo: Neil Brander / Oxfam America

Oxfam America’s mission is to create lasting solutions to poverty, hunger, and social injustice. Its effectiveness involves both approaches: funding programs on the ground and mobilizing their network of supporters to advocate for change. I led a group of DFW board members and DFW Executive Director, Beth Ellen Holimon, to Cambridge, MA, where we participated in an International Women’s Day conference sponsored by OXFAM.

We learned about Oxfam’s efforts to promote transparency in the mining, coal and gas industries. And its effort to assist communities in tracking money paid by US companies to foreign governments for the rights to extract natural resources. That data will enable communities impacted by extractive enterprises to determine if they are reaping an appropriate  share of the financial benefits  All too often the answer is no. It’s no surprise that women are disproportionately impacted by the presence of extractive industries in their communities. 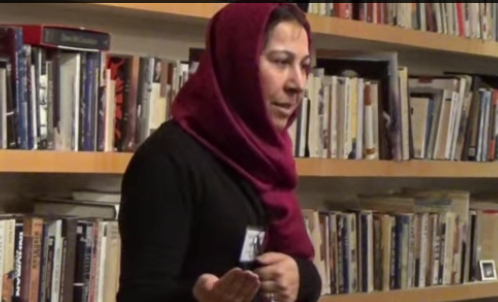 Shinkai Karokhail is the lone member of Afghanistan’s Parliament to speak out for women and girls. Her voice prevailed, however, and more than 50 Shia Family Law changes were made more equal because of her efforts. Photo: Mina’s List

Mina’s List is an organization dedicated to helping women run for elective office in countries around the world. Founded in 2014 by Tanya Henderson, an international and human rights lawyer, Mina’s List believes that women’s representation in governments leads to greater protection of women’s rights and more secure, stable and productive nations for everyone.

According to an Inter-Parliamentary Union survey of 187 women holding office in 65 countries, women’s presence in politics increases the amount of attention given to social welfare, legal protection, and transparency  in government and business, and 80 percent of respondents said that women’s participation restores trust in government.

Isn’t that an exciting concept? Talk about a top-down approach! Put women in places of power at the top of the policy-making bodies globally and press for change that advances women’s rights in the political sphere! 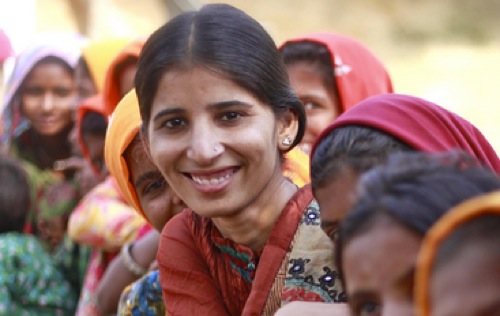 100 under $100: Tools for Empowering Global Women is an exciting resource for people interested in making a real difference. Written by Betsy Teutsch, a DFW chapter leader from Philadelphia, PA, it highlights effective and inexpensive strategies, processes and products to improve the health, education and well being of women in the developing world.

A number of programs funded by DFW are featured in the book, which provides readers with information about high-impact projects in areas from healthcare to legal and financial practices that work and are inexpensive! Anyone can become a change agent by supporting the initiatives Betsy has featured in her book. Now that’s a fresh take on a bottom-up approach to social change!

The obstacles to global gender equality are myriad and complex. Attacking these challenges in a variety of ways, from the grasstops of policy to the grassroots of hands-on advocacy, makes success much more likely.

It takes all of us working with passion and compassion to realize progress. I share Hillary Clinton’s belief that the unfinished business of the 21st century is closing the gap in gender equality. Let’s commit to doing everything we can to make sure we have closed that gap by the beginning of the 22nd century.