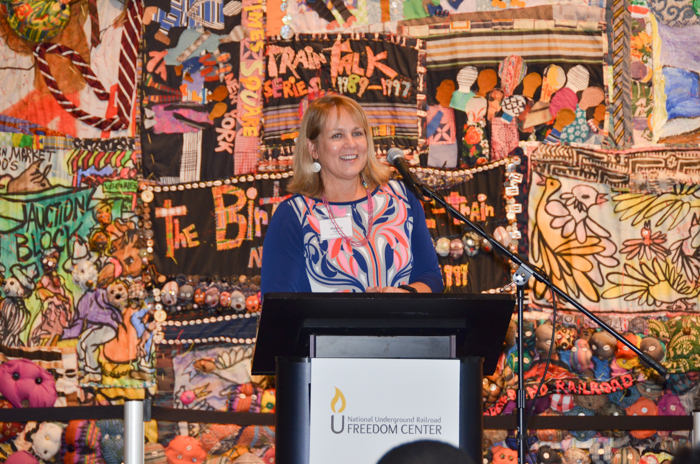 Marsha Wallace accepts the Everyday Freedom Heroes award at the National Underground Railroad Freedom Center in Cincinnati on Oct. 11, 2014. Barb Collins was unable to attend and Marsha accepted on her behalf as well.

The award was presented during a Day of the Girl celebration at the Freedom Center on Oct. 11, 2014. The event was part of the Central Region Conference in Cincinnati.

The award “celebrates individuals from all walks of life whose extraordinary choices at key moments paralleled the courageous actions taken by participants on the Underground Railroad.” Richard Cooper, of the Freedom Center’s educational staff, says it is  given to “ordinary people doing extraordinary things.”

Marsha and Barb join a distinguished group of recipients, including Muhammed Ali, the Lindor family (Cincinnati philanthropists), Craig Kielburger (who started the Free the Children foundation 12 years ago – he was 11), Kevin Bales (co-founder of Free the Slaves, a sister organization of the world’s oldest human rights organization, Anti-Slavery International) and David Brion Davis (a Yale professor, historian and writer, widely recognized as the world’s leading authority on slavery and abolition). The citation on Marsha and Barb’s award reads:  “Whose tireless fight for the freedom of those who are un-free is deeply appreciated.”

The award is given two to three times per year when nominations are reviewed by an internal committee. Recipients, Cooper says, have to be “on the scale of really changing the world.” They become part of the museum’s permanent exhibit and are honored with a picture on a wall of heroes as well as a video recording that is part of the interactive display. Barb and Marsha will be added to the exhibit this summer.