The girls learn in many interactive ways — by doing things, not just reading about them. So our travelers participate in math games, and storytelling.

Today was the first day we would actually be working with the girls at the Mariposa DR Foundation in the Dominican Republic. This service trip was designed to allow us to spend time with the girls doing a variety of activities that were part of their regular schedule.

Because the roads are so windy and the traffic so speedy (plus they also drive on the shoulder!), it’s dangerous to walk along side the main road from our hotel to Mariposa. Fortunately, we could enjoy the 15-minute walk along the beach, so we took that scenic route and saw a few early morning swimmers and joggers along the way.

After a breakfast of coffee, oatmeal and fresh fruit, Amanda Bucci, the program manager at Mariposa, broke us into three groups. Group 1, the “project” group, sorted through and made a spreadsheet of all the kitchen equipment we had all brought with us for the girls to use in their student kitchens. The other two groups were divided between the reading and math groups. Each group of volunteers had the opportunity to rotate through all three areas in the morning. 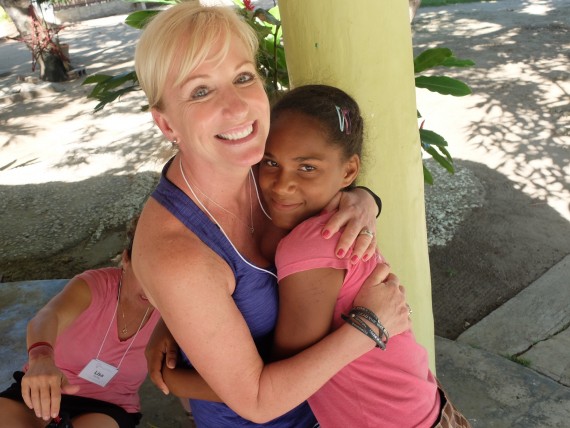 Tammy Frazier of Scottsdale, AZ, makes a special connection with a Mariposa student

The girls in the reading group enjoyed having a volunteer listen to them read. With very little coaxing, most were able to tell the story in their own words and some acted out the story!


The math class consisted mostly of playing math games. Mariposa uses every resource available to entertain and educate their girls. Bottle caps with the numbers 1-20 were used as a number line and the girls knew several games to play with them. We also practiced saying the numbers in English. Twister was drawn on a cement patio and the girls added the value of red, green, blue and yellow chalk circles as they put their hands on feet on the different circles. As you can imagine, there was a lot of laughter going on with that game!

The younger girls (ages 8-12) arrived by bus to Mariposa in the morning for breakfast, attended classes, had a snack then were transported home. At 2:00 they are expected to be at school. After a two-hour break in the middle of the day, the older girls (ages 12-18) who had been at school in the morning arrive by bus or van for afternoon classes. One of the big draws of Mariposa is that they offer safe transportation for the girls.

We were told that the older group of girls frequently have “attitudes,” but we discovered they were polite and appreciative of our presence. The DFW women rotated through groups 1,2 and 3 again in the afternoon, and we enjoyed learning a few new Spanish words and the girls enjoyed showing off some of their English skills. These girls have a lot more responsibility at Mariposa, and six of them showed us the Snack Shop by the side of the road in front of Mariposa where they make and sell fruit smoothies. They could tell us all about the sanitation precautions they needed to take and were proud to mix up a batch of pineapple and coconut milk with ice for our group.

We ended the day with a 30-minute bus drive to a lovely restaurant called the Blue Moon. We were the only patrons for the evening, and enjoyed having the intimate setting to ourselves. Patricia Andersson from Portland, OR, led a Q&A session between courses, and all of us had the opportunity to share what had made the biggest impression on us so far. Unexpectedly, sometimes the smallest action by a girl or being in a spectacularly beautiful place took our breaths away! I was particularly touched by a young girl taking me by the hand and sitting against the wall so she could read to me. She wanted my undivided attention and she got it!

Featured photo: Travelers listen to the Mariposa girls reading in the library