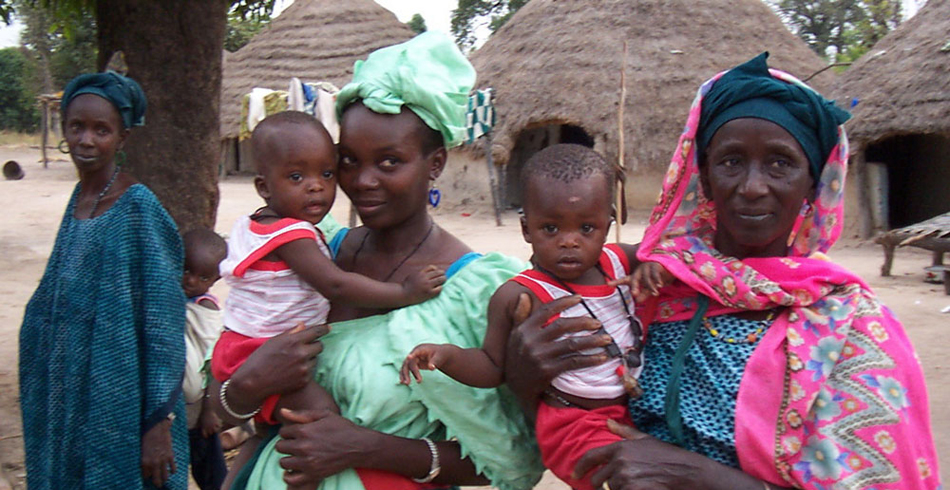 In the rural area of Velingara, Senegal, bound by culture and tradition and influenced by the modern world, young and adolescent girls face various constraints related to early/forced marriage, female genital mutilation (FGM) and teen pregnancy that hinder their opportunities for formal education and possibilities for equality. In this region of West Africa, old women are both ubiquitous and invisible. They care for and watch the children, settle family squabbles and sit in the shade of thatched awnings as the years pass by.

The Grandmother Project combines these two forces – grandmothers and adolescent girls – to create a unique and powerful interplay that goes beyond other anti-harmful practice programs, utilizes the knowledge and respect of grandmothers with village parents and elders and sets into play a dramatic and innovative method for helping villagers make decisions about traditions that protect and benefit the girls and the entire village. While the project does benefit the girls, its focus is on grandmothers as agents of change, bringing them to the center stage as arbiters, sages and champions of adolescent girls.

It is an age-old tradition in this area of Senegal to marry girls off at a very young age, even 12 or 13. The fact that girls are now sent to school contributes to maintaining the tradition because parents fear that if their girls stay at school beyond puberty, they risk becoming pregnant, which is a valid concern. Families and communities see early marriage as a protective and preventive strategy.

The rates of teen pregnancy in the Kolda region, of which Velingara is a part, are frequently reported to be among the highest in the country. For girls in primary school (ages 7 – 14), several factors increase the risk of pregnancy: the absence of any formal sex education; the breakdown in communication between generations, which adds to their ignorance on sexuality and reproduction; and the fact that girls who go to school move out of the orbit of family supervision and control.

For generations, West African villagers have practiced ritual genital cutting (female genital mutilation or FGM) as a rite of passage for girls and preparation for early forced marriage in their preteens. Experts estimate that each year in Africa, between two and three million girls are subjected to this practice.

The elder women of the village perform the ritual cutting without regard for sterilization or pain control. The practice is harmful and dangerous, leaving at best, girls who will never enjoy pleasure from intercourse and at worst, serious infection, organ damage, incontinence, infertility, prolonged labor or death. Although Senegal banned the practice in 1999,  FGM persists today as an underground activity against the backdrop of social change that has widened the gap between generations and created modern day problems for the villagers and a breakdown in communications. Even in remote communities, western values communicated through the media encroached on traditional values, and western biases against elders discredited the sage roles of grandmothers and grandfathers. 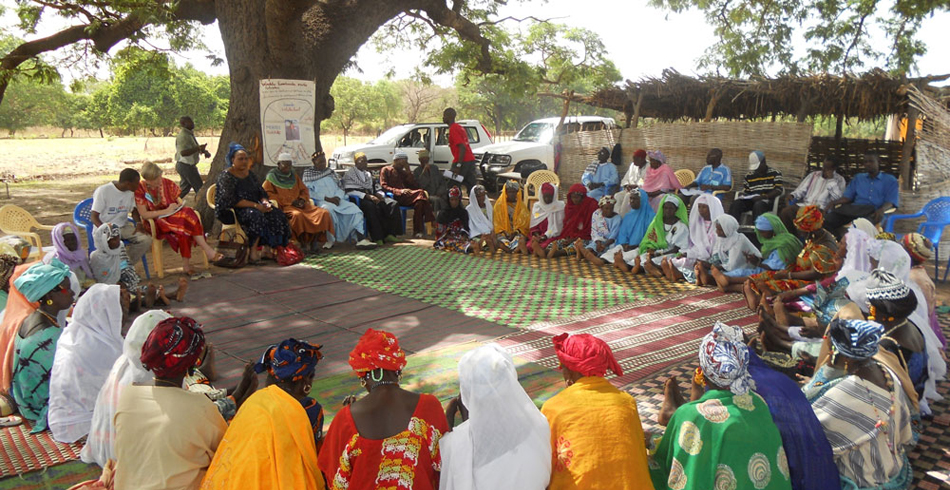 GMP focuses on grandmothers as the agents of change for villages to address harmful practices and factors that escalate modern-day problems for adolescent girls. Grandmothers are trained and empowered to be the central figure in each village as the catalyst for changing thinking and customs at the village level.

Grandmothers are key to the program because they have respect in their villages, with both the village elders and with the younger women and children. They are the vessels that carry the traditional songs, dances and stories of the village, and they offer wisdom to the young women who are marrying or having children. They have the respect of their sons who will not refuse them. If grandmother leaders can see the harm of FGM and early marriage and the benefits of more education for girls, their voices will be heard.

The Palaver Tree (“une arbre de palbre”) is a place in a village where you go to start long and intense discussions, but also tell a story, organize a city or even talk about lighter things. It’s the place for discussion and listening. It is a majestic tree with an impressive stature that casts cooling shadows especially during the dry season. Often a baobob tree, the palaver tree is a one whose leaves do not shed annually so it provides shade in all seasons.

The GMP program is comprised of four activities:

Activity 2:  An eight-day workshop will train experienced grandmother leaders to lead groups and teach other grandmothers to be leaders and advocates for adolescent girl health and safety issues. Five experienced grandmother leaders, drawn from past projects and acting facilitators, and two women from the local teacher association will be brought to Velingara for the train-the-trainer session. Leadership topics include democratic leadership, role of effective leaders, conflict resolution and participatory evaluation techniques of community activities. Key issues addressed in the materials include menstruation, reproduction, contraception, early/forced marriage, teen pregnancy, FGM, adolescent nutrition and HIV/AIDS. 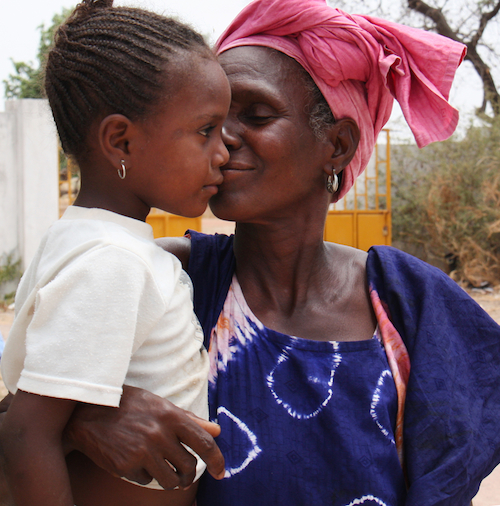 Activity 3:  “Under the tree” leadership sessions with grandmother leaders will be conducted in 30 villages in the region. Grandmother facilitators conduct a total of 180 “under the tree” pilot sessions in 30 villages for 300 already identified grandmother leaders. In a safe, culturally respectful environment, sitting in a circle “under the palaver tree, participants can share their opinions about early marriage, teen pregnancy and boy-girl relationships, learn new information about sexual and reproductive health and discuss their ideas on what they can do to create an environment for girls that encourages their education and ensures protection from harmful influences. Under the supervision of GMP staff, the facilitators lead six sessions in six villages over a six-month period. Grandmothers, village leaders, teachers, religious leaders, girls and parents participate in the sessions which are designed to educate as well as open channels of communication between influential groups to discuss ways to bring about positive and sustained change.

Activity 4: GMP staff reassesses knowledge and attitudes of the participating facilitators following six months of under the tree training to measure how much the project experience has changed how the grandmothers feel about harmful practices on adolescent girls.

Activity 5:  GMP staff conducts a workshop to launch the project report on results and lessons learned from the training. Present are the facilitators as well as local officials and key organizations in Velingara.

DFW’s one-year grant of $44,500 will fund 88 percent of the training of 300 grandmothers who will work with 180 adolescent girls. The grant will be used to strengthen the knowledge and leadership role of grandmothers, building on their traditional advisory role to promote improved adolescent girls’ health and well-being by working as change agents in their communities to stop harmful practices. The project will develop and test a complementary strategy to explicitly target grandmother leaders in order to expand and increase their influence on community members to promote change related to the three priority problems. Training tools and exercises will be developed for literate and illiterate grandmothers. The budget reflects the activities that will encompass the project, from training the leadership trainers to evaluating the project.

Why We Love This Project
We love grandmothers as agents of change. We love the opportunity to empower these elder women to connect three generations to discuss and find indigenous solutions to challenges faced by the young girls and adolescents in the community, which are based on cultural tradition or cultural changes. Empowered by GMP’s leadership training sessions that also inform them about the harmful effects of early/forced marriage and FGM, grandmothers are able to change harmful behavior and practices in their communities and, in turn, ensure more positive outcomes for adolescent girls.

A three-year Girls Holistic Development Project with World Vision (2008-2011) contributed to very positive changes related to early marriage, FGM and teen pregnancy. The preferred age of marriage for girls increased from 15.6 to 17.3 years. The percentage of mothers who viewed FGM as a “cultural obligation” fell from 88 percent to 9 percent. The percentage of grandmothers with this opinion decreased from 86 percent to 5 percent.

Since 2010 GMP has been working in primary education to integrate positive cultural values into school materials and teaching and to involve grandmothers as resource persons in classrooms. Extensive interviews with children, teachers, parents, grandparents and community leaders have revealed several positive changes:

“When you’re an older person, you are seen as the last resort if there’s a problem within the community. That’s why, sometimes, women ask us about problems understanding the restless behavior of a daughter, they ask us about arguments between neighbors and problems connected to the health of a pregnant woman and of children.”
—  Polel Baldé from Diakalegny

“A young woman always needs advice from older women like ourselves. Women still ask the advice of certain grandmothers, even if they’re not leaders, because of their experience. They ask for advice about their health, and that of their children.”
— Mballou Sabaly from Netterouka

“Women always come and ask advice. They do not only ask the leaders, but they often ask any woman who has more experience than they do.”
— Djiba Baldé from Kerewane

“In the past, we married girls off when they were 13 or 14 years old and we didn’t ask them if they agreed with our choice of husband. Since GMP starting working in our area, there have been many discussions between us, the grandmothers, and also with other community members. Now we know that we should let our girls stay in school and complete their studies and wait to give them away in marriage until they are 18 years old. We have decided that the traditional approach is not the best.”
— Coumbayel, President of Grandmother Group, Sare Samba Nety village

GMP is a learning organization that continues to build a knowledge base related to community interventions that are grandmother-inclusive, intergenerational and that use participatory, adult education methods. A process of continuous and participatory learning with development workers, community leaders and groups allows GMP to document its work, develop instructional lessons and disseminate these to others.

Judi Aubel, left,  an anthropologist, adult educator, and public health educator; and Elisabeth Mealey, an Australian journalist and communications specialist, founded the Grandmother Project in 2005. The organization grew out of a series of successful experiences, which Judi coordinated, involving grandmothers as leaders of change in community maternal and child health programs in Laos, Senegal, Mali, Uzbekistan, Albania and Mauritania. In each case, it was found that involving grandmothers contributed to positive change and increased results.

Senegal is located in West Africa. Its capital, Dakar, is the western-most point on the continent of Africa. The country, slightly smaller than South Dakota, surrounds Gambia on three sides and is bordered on the north by Mauritania, on the east by Mali, and on the south by Guinea and Guinea-Bissau. Senegal is mainly a low-lying country, with a semi-desert area in the north and northeast and forests in the southwest. Senegal has been held up as one of Africa’s model democracies according to BBC News.

In spite of widespread poverty and high unemployment, the country has one of West Africa’s more stable economies as well as an established multi-party system and a tradition of civilian rule. Political participation and peaceful leadership changes are not new for the Senegalese people. Senegal had representatives in Parliament when it was a colony of Great Britain and has maintained its active participation up to its independence in 1980 and to the present.


More on The Grandmother Project