Connections, For members, Together Women Rise

Marsha Wallace is a voracious reader and she loves the new book “Teach a Woman to Fish.” Read her thoughts on some key topics author Ritu Sharma focuses on.

I just love a good book, and I know you do too, which is why I am excited to tell you about Ritu Sharma’s book, “Teach a Woman to Fish.”

Ritu is co-founder of Women Thrive Worldwide, an organization that “advocates for change at the U.S. and global levels so that women and men can share equally in the enjoyment of opportunities, economic prosperity, voice, and freedom from fear and violence.”  They advocate for women and families who live on less than a dollar a day. I first became aware of Women Thrive Worldwide (WTW), in 2008. And in 2009, a representative conducted a session on advocacy at our National Leadership Summit in Chicago.

More recently, I was among a group of DFW leaders privileged to meet Ritu in person when she attended a chapter meeting in Washington, D.C. last November. Ritu told me she was putting the finishing touches on the book, and I couldn’t wait to read it. I’ll just say it, I was a fan of Ritu and the work her organization does before I read “Teach a Woman to Fish”, but I’m a raging fan now. 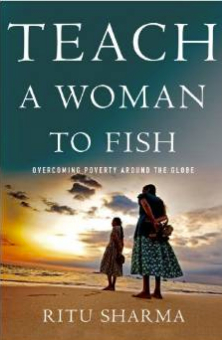 “Teach a Woman to Fish” is a different kind of book on global women’s’ empowerment, because it brings to life the challenges of affecting real change on so many fronts, covering the world of policy-making at the government level and the impact advocacy has on policy,  the labyrinthine world of U.S. government aid as well as personal stories of individuals. “Teach a Woman to Fish” illustrates in a thoroughly conversational, easy-to-read style, the tremendous strength, intelligence and resilience of women in four countries: Sri Lanka, Honduras, Nicaragua, and Berkino Faso.

As you travel with Ritu on her journey through these countries, you will gain a broader understanding of the systemic obstacles that hold women in poverty, the power and the obligation of governments to create change, and you will be empowered by learning how you can advocate for change with your pen and your pocketbook!

Ritu says, “Poverty is not about having no money, it’s about not having the power to change your own circumstances.” Governments should provide the basics of education, healthcare and access to economic opportunities. But many do not so international aid groups jump in to provide them. The U.S. government has a lot of power to incentivize governments in other countries to do right by their people, says Ritu, because the U.S. is the largest “international donor,” it has the largest diplomatic force, and it is a tremendously favored trading partner. The U.S. has influence.

Ritu describes what it takes to write government policy that includes a gender lens. For example, she explains WTW’s work in making sure that one of Bush’s signature international programs, The Millennium Challenge Act, (MCA) a program designed to eliminate global poverty, included the needs of women from the very beginning of the planning process, and followed through to ensure that it happened on the ground. Readers learn how the money allocated by the MCA influenced recipient governments to include women in their development projects.

“Poverty is not about having no money, it’s about not having the power to change your own circumstances.”
— Ritu Sharma

Systemic challenges to women’s’ advancement are brought to light as we follow interactions between developing countries’ governments, grassroots NGOs and the U.S. as projects for MCA money are proposed and rejected.  Examples include lack of property rights, government corruption,  and basic infrastructure such as roads, bridges and access to clean water.

Readers will learn about transformative women’s groups in Sri Lanka, Honduras, Nicaragua and Berkina Faso, and the strong women leaders who pushed their governments to include them in MCA projects.

The outcomes show what we already know:  Women are powerful agents of change when given resources and support. But it isn’t enough to see that the policy is written. It takes vigilance ( “following the money”) and monitoring outcomes, which is where many of the awe-inspiring personal stories in the book come from. Ritu traveled to visit women’s groups and see how the MCA money impacted them and the changes it has made in their lives.

Another fascinating glimpse of policy-making is Ritu’s account of WTW working with several heavy-hitter organizations like The International Center for Research on Women, The International Rescue Committee  and CARE to write the International Violence Against Women Act (IVAWA).  She writes of the agonizing process of trying to get it through Congress so that it can truly help women takes patience, diplomacy and perseverance. Our help is needed! Over and over again congresswomen and men say that they just aren’t hearing from their constituents about global poverty, women’s issues or this legislation. According to Ritu, if legislator gets 50 letters saying, “Pass IVAWA now!” it is a tidal wave of support. The good news is, it doesn’t take as much as we think it does to make Congress pay attention!

Read reviews of  “Teach a Woman to Fish” on Amazon

In addition to writing about the intricacies of getting large development agencies, governments, and local villagers to include women in development projects, “Teach a Woman to Fish” highlights the ways WE can help. At the end of each of the three sections is a chapter titled What You Can Do For….. 1. Sri Lanka, 2. Honduras and Nicaragua, and 3 Berkino Faso. This is where the basics of advocacy and the impacts we can make come in. At the end of Part 1, Ritu shows us how we can influence corporate America with “whisper campaigns” and letters to the CEOs of our favorite brands. At the end of Part 2, we learn how we can take on  Congress and work toward getting IVAWA passed, and at the end of Part 3, she encourages us to make a difference by sharing the book, writing letters to call for change, to follow our inspiration to make a difference with any of the ideas from the book that resonate with us.

“Teach a Woman to Fish” appealed to me because it digs deep, exposing the intricacies of promoting women’s empowerment in government programs like the Millenium Challenge Account (MCA) program, within aid agencies like USAID, and working on IVAWA. I suspect for most readers though, especially if they are new to the harsh realities of extreme poverty, the real meat of the book will be in the powerful personal accounts of the women Ritu met during her travels, and the ways in which they are overcoming profound discrimination with intelligence, strategy and diligence. In each section, she details local grassroots organizations that are changing the lives of women in their communities.

I highly recommend this book because of its overarching theme of the power women have to be change agents. What is especially exciting to me, though, is the close look from the insider’s perspective of how development works at the government level, outlined by stories of USAID funding and the MCA program. Even more interesting than that, are her illustrations of the work WTW has done at the policy level, writing and lobbying for support of policies like IVAWA.

We cannot underestimate the power that we have as individuals to impact our government with our own voices and pens. And, as Sharma has so clearly illustrated with real life examples, we cannot underestimate the tremendous influence the U.S. has to incent other countries to do what is right for women and girls. It takes all of us working at every level to make sure that the world is made a more equitable place for women and girls, because all of us, men and women alike, benefit.