From 9600’ Elevation in Colorado to 98’ Above Sea Level in Rhode Island: Two Unique DFW Chapters

Once you read this blog, I bet you will want to visit these two unique chapters yourself! Take a peek at what makes these Dining for Women (DFW) chapters attract and keep members.

At 9600 feet elevation, the Breckenridge, Colorado chapter is on a “Rocky Mountain High”! By embracing the outdoors and thinking of cool projects — even art projects — this chapter is thriving. 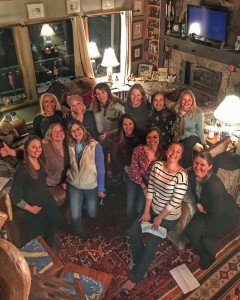 In 2013, Chapter Leader Lisa Eurich heard about DFW from a woman she encountered on a trip to Atlanta—the woman had traveled to Kenya on a DFW trip. Inspired to start a chapter herself, she began with a few friends and a bottle of wine. Now the roster has exploded to 35 members driven by the combination of fun activities while also delving deeply into DFW’s funded projects.

It’s a diverse group: members range in age from 30 to 65, and from single professionals to mothers and grandmothers. A typical meeting usually has 12 to 14 members in attendance. They gather every other month on a weeknight: think full moon hikes and snow shoeing!

“Surrounded by seven ski areas, two reservoirs, and two mighty rivers (but nine months of snow), it was no surprise when members suggested that we take the discussion outside,” according to Lisa. But once inside, chapter members are serious about their commitment to DFW’s monthly grantees. “It’s more than a social gathering. We always bring it back to the project we are supporting.”

For example, Etta Projects in February 2017 empowered women in Bolivia to serve as first responders, so they decided to work with a local first responder in Breckenridge. After small bites and a discussion of the project, their local first responder guided them outdoors on a “safety hike.” (Be sure to watch their fabulous video to see them in action and learn how they honor the designated presenter of the month!) In addition, a recent dinner incorporated a surprise party for their very own video editor, Jenn Faoro.

At 98 feet elevation, the Peace Dale, Rhode Island chapter is open to everybody and anybody, men and women alike! Less than a year old, the chapter has taken off due to the enthusiasm of Chapter Leader Gail Burchard and a welcoming atmosphere created by chapter members.

Gail had been running an Airbnb in her beautiful area outside of Providence, RI. One of her guests is a member of a New Hampshire chapter and told her about DFW. Coincidentally, Gail had been looking for a cause she really believed in. That’s when she set out to “create her own tribe” by appealing to members of her Unitarian Universalist Congregation (UU) and other people from the surrounding community to join the fledgling chapter.

Meetings are held in a UU community room that is able to accommodate the average attendance of 25 people. The monthly meetings are advertised in the local newspaper’s Calendar of Events and are open to the public. “People come as they are and when they can.” Gail’s three college-age granddaughters also attend meetings along with their mother, making it a multi-generational experience. In the summer months, members enjoy each other’s company on porches and decks at volunteers’ homes. 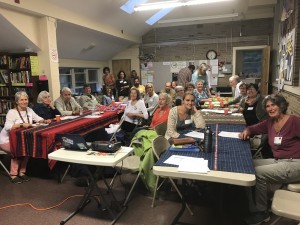 Committed to learning as much as possible about the monthly grantee, they use every possible resource available, including the speaker contact list, the grantee website, and other resources. In May 2018, when the Batonga Foundation in Benin, West Africa was the Featured Grantee, a Returned Peace Corps Volunteer who served in Benin spoke at their meeting. In October 2018, they had a Skype interview with Naheed Samadi Bahram, NY program director for Featured Grantee Women for Afghan Women (WAW), which was well-received by members. The chapter boasts fabulous cooks who use the featured recipes from DFW’s website under “Recipes, Customs, and Cuisine.” Clearly this chapter is much closer to sea level than the Breckenridge chapter, but just as mighty!

While both chapters are from different parts of the US and very different elevations, they share traits that make each highly successful. First, they have attracted people who love to travel and learn about different cultures, who are truly global citizens. They also work on dynamic programming to build a community that supports DFW’s mission of empowering women and girls. I’m already thinking of ways that my Fairport, New York chapter can incorporate some of their ideas!