Dining for Women is moving to be a part of the broader conversation about gender equality and women’s global empowerment. We have connected with Oxfam America on some projects and recently Marsha Wallace was invited to become an Oxfam Sister on the Planet Ambassador. Through that lens, we are having our eyes opened to some issues in the world of international rights, compensation and environmental impact. 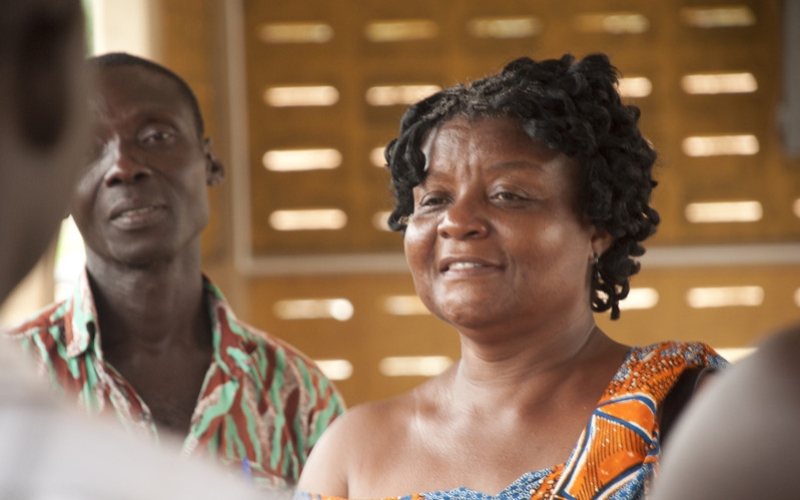 Hannah Owuso-Koranteng leads Wacam’s work to train people affected by mining to understand their rights under the Minerals and Mining Act, and to lead better negotiations with mining companies. Photo: Jeff Deutsch/Oxfam America

In 1995, Hannah Owusu- Koranteng founded an organization in Ghana to train women and communities to defend their rights. They have been educating and training activists in communities where mining is taking place to ensure that they receive fair compensation, know and can protect their rights, and are able to monitor environmental impacts like cyanide contamination.

“When mining companies damage water resources or the environment, it creates social and economic problems that burden communities, especially women,” Hannah says. “Companies and governments must do more to address the unique impacts the industry has on women, and include their voices and perspectives as well. If women’s voices and perspectives aren’t heard, an opportunity is missed to improve society.”

Her organization – Wassa Association of Communities Affected by Mining, or WACAM – believes in getting women involved and trained in these communities, which resonates with me and with DFW’s mission of empowering individuals to fight for their rights and opportunities. Women and communities learn how to collect water samples to verify cyanide contamination, contact the government and negotiate compensation with the company responsible. They even are trained to deal with the media to raise awareness and pressure companies if needed.

They’re not giving handouts, they’re empowering and equipping individuals to take control of their own futures. Hannah was just one of the inspiring stories I heard at an International Women’s Day event hosted by Oxfam last month. Oxfam convened women leaders from Africa and around the US to discuss the impacts oil, gas, and mining projects have on women and the work these women leaders are doing to reduce poverty and inequality. I joined as a new Sister on the Planet Ambassador.

Women are often the hardest hit by social and environmental problems related to large-scale projects like oil or gas pipelines, or a gold mine. And while they face more of the consequences, they also often do not share equally in the benefits of successful projects.

“Loss of income and livelihoods, missing out on compensation and benefits, prostitution and trafficking, and gender-based violence are problems that often arise when mining companies fail to engage women in neighboring communities and protect their rights,” said Nadine Kone from Oxfam in Senegal.

In another session, Ndanga Kamau from Oxfam Kenya, echoed similar sentiments.  “When new oil, gas or mineral resources are discovered and developed, women are often among the groups that are excluded from the decision-making process or kept in the dark about important information. There needs to be strong policies and awareness from companies, governments, and citizens about the rights women have and how to prevent women from bearing the brunt of the negative consequences but missing out on the potential benefits. It’s time to see action from the industry and the public sector.”

According to Oxfam, there are more than 50 countries that qualify as resource-rich, meaning they have significant oil, gas or mineral resources. Unfortunately, in many of these countries, the majority of citizens only live on $2 per day. With more than 60 percent of the world’s poorest people living in countries with natural resources worth billions,  it’s important that some of the profits are used to improve the communities by reducing poverty and inequality, fueling economic development, and investing in education and health care.

Often this is not the case and these countries instead continue to have high rates of poverty, corruption, instability, and violence.

I believe poverty is alleviated when the underlying  injustices that cause it are addressed. Women play an essential role in ending these injustices.

Visit Oxfam America to learn more about this issue.

Featured Photo: Oil rigs exist directly off the coast of Takorade, in the Western Region of Ghana. Oxfam partner, Friends of the Nation, is one of 100 members of the Civil Society Oil Platform, an association that is advocating for transparent management of oil revenue. Photo: Jeff Duetsch / Oxfam America