A Mother’s Day Tribute to Moms and Mentors

Who taught you to stand up for yourself and for others? Who showed you that being kind didn’t mean being weak? Who helped you become the woman you are today? For most of us it was our mom, or an aunt, or a sister, teacher or friend. In honor of Mother’s Day, we invited our programs to share stories of strong mothers and confident daughters among the women and girls we’ve supported. These are their stories. 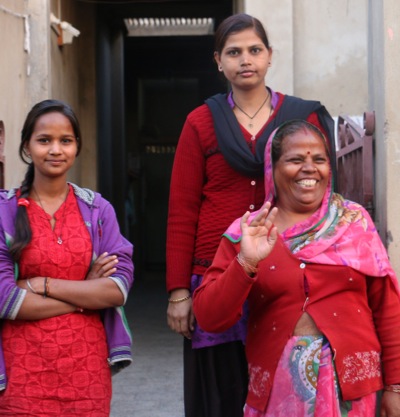 Kamla, right, and her daughters Punja and Santu at the entrance to their new home

“I just want to make my daughters proud”

Kamla was born into extreme poverty and never went to school.  She worked as a laborer from the time she was just 13 years old until she was old enough to have an arranged marriage. She married and had her first daughter at age 18. Today she is a 53-year-old-woman with four daughters ages 10-35.  Kamla was determined to give her daughters the opportunities that she never had, but struggled to find safe, reliable work.

Today, Kamla has been working with Anchal for five years. She has worked very hard, consistently creating beautiful, marketable pieces. She takes advantage of the education workshops in subjects such as financial planning and goal setting and recently saved enough money to purchase a home of her own. Her youngest daughter, who recently taught Kamla how to sign her name, is in 3rd grade. Two of her daughters are in high school and the oldest one is in graduate school, studying to become a teacher herself.

Kamla’s daughter’s lives are not only economically improved, they are enriched by the prospect of higher education and empowered by possibilities. Kamla is a shining example of what ambition and determination can accomplish.

In our most recent trip to India, we visited Kamla’s new home in Ajmer. As we were walking up to the entrance she said, “I just want to make my daughters proud.” Seconds later her daughters greeted us and embraced her with loving hugs. In that moment we had no doubt that she had already succeeded. Kamla’s daughters are young, fearless agents of change, not only because of their education, but because of the example that their mother set. We can’t wait to see what they do next. 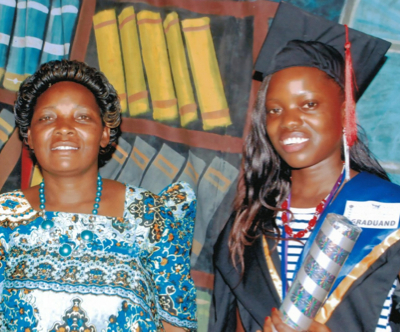 Olive and her daughter, Lydia. Lydia received an economics degree and is now going into business with her mother.

“Pay for the girls first and I will go after”

Olive Wolimbwa,  local director at Women’s Microfinance Initiative in Uganda, has used her business skills and experience to support and teach her family. She has been able to send her two oldest children through university, and now is working with her oldest daughter, Lydia,  in a new mobile money business. Lydia graduated from university this past year with a degree in economics. She recently started a mobile money business in Mbale, and Olive is investing $400 in capital she received from the loan program to help get her daughter’s business launch.

Of all the benefits WMI has brought to village women, Olive says she is proudest of how her whole family now understands finances, and can plan together and support one another. The family did not have enough money to pay for both her second son and daughter to start university at the same time. Sitting around the kitchen table and looking at their finances together, her son, Sam, saw this and said, “Pay for the girls first and I will go after.” Now that Lydia has finished, Sam will start university this fall.

Olive plans to pay back the monthly deposit and interest on this loan through her existing business salaries. The funds have been invested in Lydia’s business and Lydia will keep all of the profit she makes. In August, she will return the $400 investment not to her mom, but to her brother Sam for his university fees. Through hard work, sacrifice, and planning Olive and her children support and invest in each other’s future. 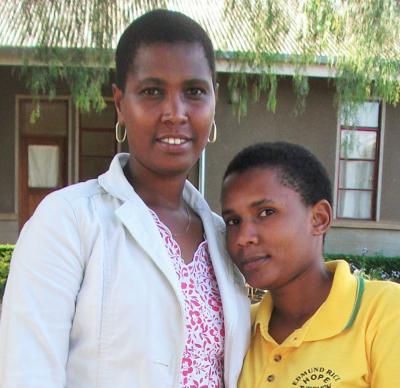 Like so many Tanzanian girls Doris, 17, a Kisa year two scholar in Edmund Rice Sinon High school, was a shy and confused girl. She was not good at speaking her mind or taking part in making decisions when it came to her family or school affairs. She nodded her head in agreement with other people’s decisions even when she had a different opinion.

Doris is interested in politics and had dreamed of becoming one of the greatest female politicians in Africa, but with her shyness and fear of being wrong she put that dream to bed. That was before she met Esther, an AfricAid Kisa Project Manager and her Kisa Mentor.

After joining the Kisa Project and participating in the weekly training with Madam Esther, Doris started to confide in her mentor.  Almost every day, she would seek her mentor out to share her feelings,  fears and dreams. These sessions, along with the training, gave her the courage to face her fears and start to participate more in Kisa classes and her normal school activities.

In Tanzania, most girls Doris’ age are in boarding school and away from the nurturing influence and wisdom of their mothers. AfricAid’s Kisa Mentors act as surrogate mothers, giving the girls attention and guidance through the difficult adolescent years.

This is exactly what Doris found in Madam Esther.  Doris is very grateful and excited to have found a mentor, a role model, a mother, a sister and a friend in Esther. “I have learned so much in such a short period with Madam Esther that has made more confident and believe that with hard work I can make my dreams come true.  I’m even going to apply in Political Science when I reach university  because I am now able to see myself as a leader that I wanted to be,” said Doris.

“This is a mutually beneficial relationship” said Madam Esther, “as Doris has showed me that I have something within me to share and as little as I think my spending time to listen to someone else is, it can a great turning point to them.”

As our Kisa Scholars go through AfricAid’s leadership and life-skills curriculum, they, in turn, learn how to become better mothers themselves.  Their children will be healthier, better educated, and have more financial security as the intergenerational cycle of poverty is broken. 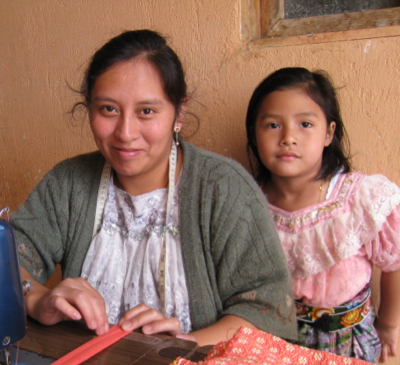 Silvia and her daughter, Nathaly, are inseparable

It doesn’t matter what she does, so long as she is happy

Silvia and her daughter, Nathaly, are best friends. They do everything together: they go to the market, cook, play basketball, and just enjoy each other’s company. Nathaly is in sixth grade. Silvia hopes one day Nathaly will fulfill all of her dreams. Silvia wants her daughter to discover her true vocation, whatever it may be. It does not matter to Silvia what Nathaly becomes when she grows up; Silvia will give her the support and guidance she needs to reach her potential. Above everything, though, Silvia wants Nathaly to be happy. 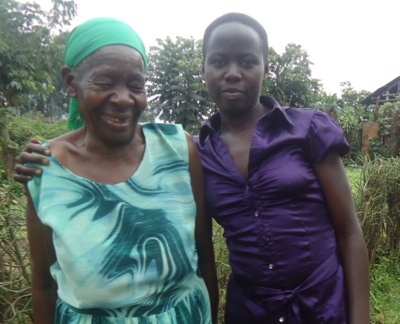 Brenda was just 7 when she was orphaned. Her grandmother, right, raised her with help from the Nyaka AIDS Orphans Project.

A future made possible because of a grandmother’s love

Imagine that you are a child — barely 6 years old — and one day your mother, who has been sick your entire life, is gone. Your earliest memories of her were of her being sick.

At the funeral, as you hold your older sister’s hand, you hear the whispers. Slim. You don’t know what the word means but even your young ears can tell that it means something very bad. Your father died not long after, leaving you and your two older sisters alone.

This was Brenda’s childhood. She grew up in a small village in Uganda where HIV/AIDS has left an estimated 2.2 million children orphaned. Many young girls who are orphaned are very vulnerable to early marriage, unplanned pregnancy, human trafficking and assault.

Had it not been for their grandmother, Brenda and her sisters could have been victimized. Their grandmother took her granddaughters into her home even though she was living in poverty and too weak to work. She gave them love and support but she couldn’t send them to school.

It wasn’t until a year later that they discovered the Nyaka AIDS Orphans Project. Brenda’s grandmother signed her up to go back to school and, in 2014, Brenda did something her 6-year-old self could never have imagined possible. She graduated from high school. Her grandmother was there at her graduation, crying tears of joy. Honor your mom or mentor