A long bus trip offers vistas of the countryside and the 8,000 golden Buddhas in Pindaya Cave waiting for our travelers. That, and pizza! 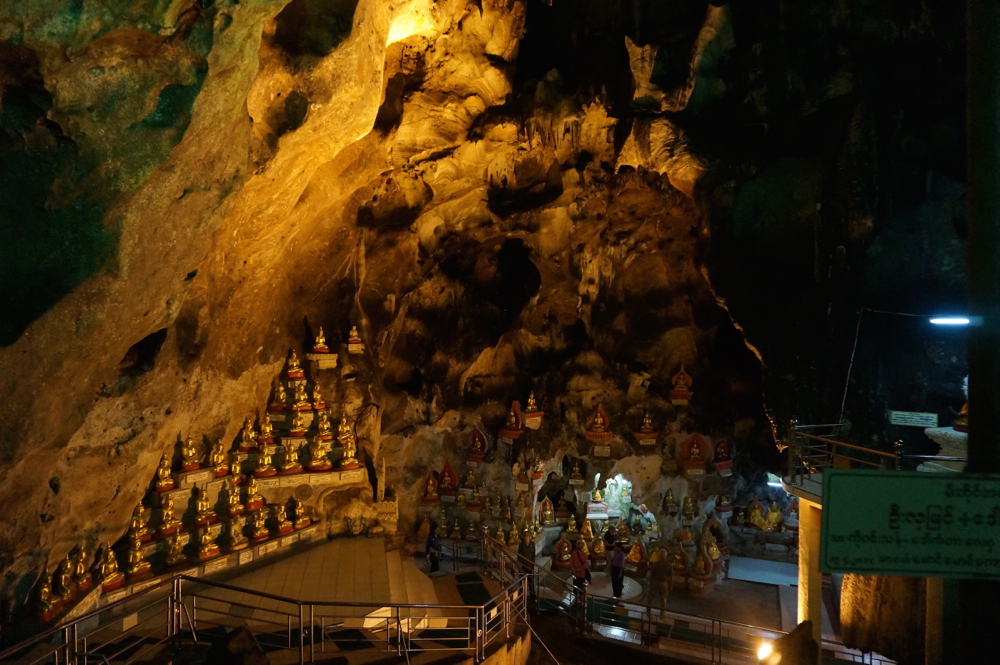 “This is the BEST day of the trip!” I said to myself.

But then again, I’ve said that almost every day.

Today we have flown from Mandalay to Heho, located in Shan State, which is one of eight states in Burma (Myanmar). Our tour guide, Win, has told us to expect a scenic two-hour drive to the Pindaya Caves, where we’re going to see 8,000 Buddha statues. This is an important pilgrimage destination for Buddhists, and there is no place else in the country with such a range of different Buddha styles, some of which date back to the mid-1700s.

We were delighted to learn that a brand new road had opened and our drive would be cut down to one hour. I was hoping, though, that it would still be as beautiful as she had promised. I was not disappointed. The landscape was lovely – many homes built of stone blocks with shutters painted a periwinkle blue, which reminded me of Provence. The hillsides were a patchwork of gold and green, which reminded me of Tuscany. But the farmers working the fields with their oxcarts reminded me of no place else I’ve ever been.

I was delighted to discover that the windows on the bus could be opened, and I darted from left to right to snap picture after picture of bucolic farming scenes that could have been taken from the set of a movie. Like everywhere in Myanmar, the people stop to wave as we pass by. For a good part of the drive, I was literally hanging out the window, snapping photos! 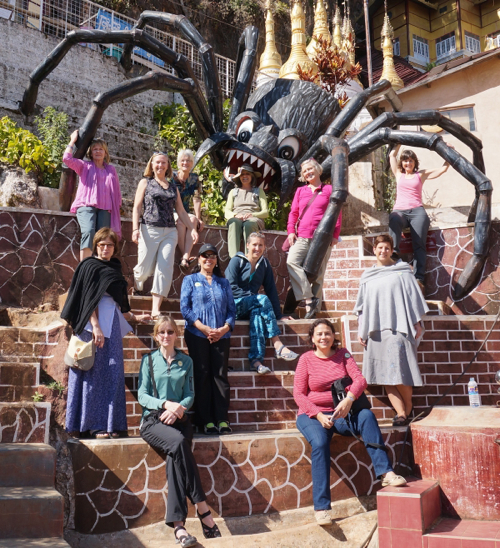 Upon reaching the cave, we were greeted at the entrance by a massive black spider – fortunately made of metal. The rather gaudy sculpture commemorates a legend which claims that seven maidens were bathing in the lake when they were captured by a giant spider who imprisoned them in the cave, sealing the entrance with a web. Handsome Prince Kummabhaya came along to save the day by shooting an arrow through the web and to rescue the princesses, who (presumably) all lived happily ever after.

We helped the local economy with a shopping stop at a family-owned business where they made beautiful homemade paper and umbrellas. The sun was setting as we pulled into the Cassiopeia Hotel in the town of Nyaung Shwe, where we’ll spend the next four nights visiting the sights around famous Inle Lake. A group of 14 American women descending on a little boutique hotel could have been a disaster – but the manager greeted us warmly, gave us the wifi password and told us that, “if we needed hot water, all we needed to do was call Reception and they’d deliver it immediately.” He must have noted the look of panic on all 14 faces and was quick to clarify that he was referring to the thermos of hot water that would be delivered if we wanted to make in-room coffee or tea. Whew!

Then he asked if we would all be OK with pancakes for breakfast the next morning, or if we preferred noodles. It was unanimous: pancakes, for sure.

We’ve all learned how to freshen up quickly after a full day of travel and reconvened in the lobby a short time later. The Golden Kite Restaurant was just across the street – where we gorged on wood-fired pizza and homemade pasta! As much as we’ve enjoyed all the local rice dishes for the past nine days, tonight’s crispy crust and gooey Mozzarella cheese was a perfect change of taste – especially with a chilled mug of local beer.

All in all, it was a VERY good day!

p.s. The pancakes at breakfast the next morning were really French-style crepes – plain, banana or chocolate – and were one of our favorite food experiences of the entire trip!