The last day with Girl Determined included a moving skit about domestic violence presented by the girls and a visit to a Buddhist nunnery. 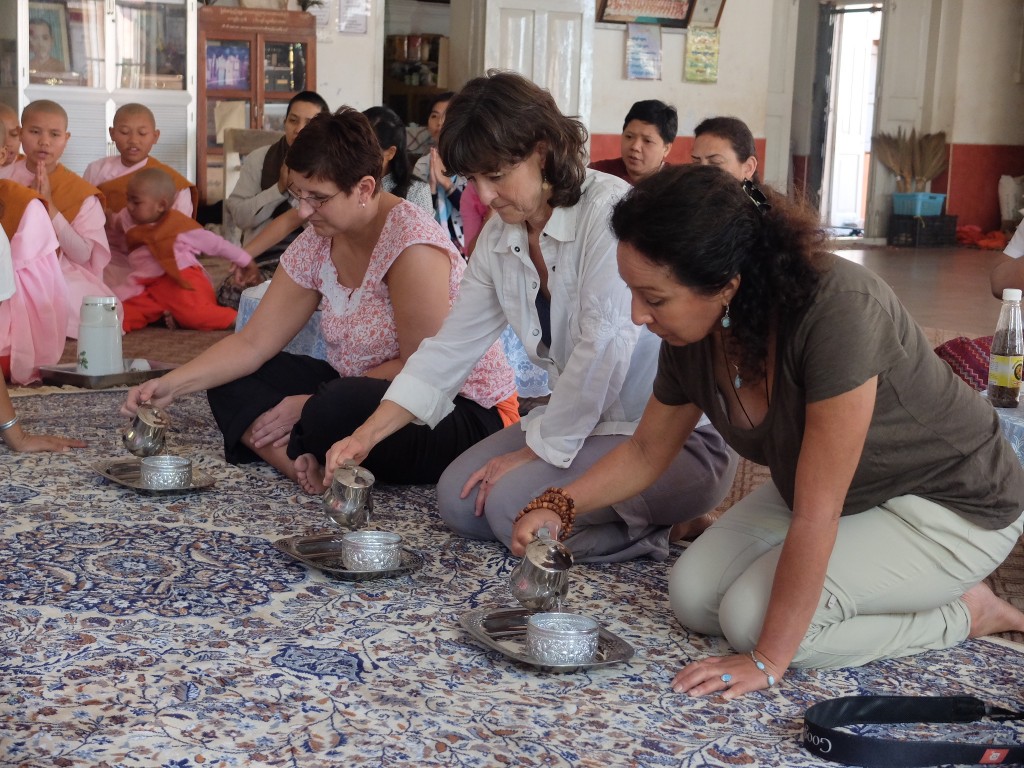 Today took us north of Mandalay to spend the morning visiting a Buddhist nunnery. Our group had arranged to prepare lunch for the nuns, a very beneficial act in the Buddhist faith, earning us “merits” towards our next life. Part of this visit was to donate alms, which allowed them to buy the food that we cooked with, and which created a very special meal for the 50 novitiates (nuns under 18 years of age) and the three adult nuns who take care of these girls.

The youngest at the nunnery was just 5 years old. Families send their girls to nunneries for various reasons, from poverty, to broken families, to those who just want a monastic education for their daughters. While in times long past there used to be an order of female monks that was equal in stature to the male monks. That order died out and now there are only the nuns, who are accorded a lower rank in Buddhist society and are often passed over for donations as it is believed to be more beneficial to give alms to the male monks.

Therefore our donation was particularly appreciated. The abbott of the nunnery, Isria Nyani — whose name translates to “Wise Person” — had been at the nunnery for 55 years, since she was 5 years old. She talked to us about how many people have wealth, but not all also have the hearts that make them want to help others. She could see that those in our organization possessed that quality and she sent a special blessing out to all 8,000 of us.

We cooked, chopped, mixed, stirred, made coffee — all under the watchful eyes of the novitiates, who took great pleasure in watching these Western women bumble about in their kitchen. Then we served them, one by one, listened to their chanted prayer of grace and blessing, and watched them consume their meal with relish. Afterwards, we took part in a Libation Ceremony, where three of us poured water from teapots into silver bowls while the nuns chanted prayers with haunting melodies. This ceremony allowed the merits we had earned to be spread out all over the world, creating a blessing for all beings. It was very moving for all of us. 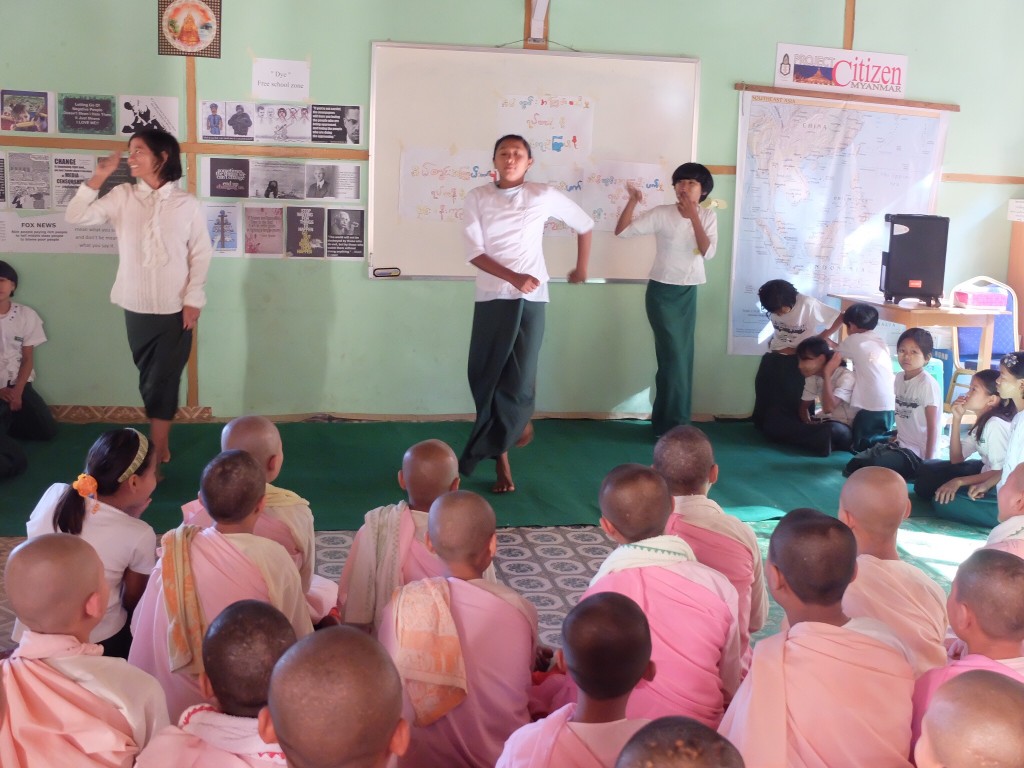 Sixth-grade girls from the Colorful Girls Circle outside of Mandalay perform a skit about domestic violence for the DFW travelers during a visit.

Afterwards, we went to visit Girl Determined and Colorful Girls Circles for the fourth and final time, to a school based at a nearby monastery. The girls in this circle were all in sixth grade, and after some initial games and conversation, they performed a skit for us that they had made for the community about domestic violence.

While for them that phrase takes on more of a meaning of “violence in the home,” it was clear that this is an issue that affects the vast majority of the girls. The skit covered various scenarios taken from their lives, from mild forms of discrimination, such as brothers being treated differently and better (all the way to daughters having to drop out of school so the sons can keep studying) to physical beatings, and marriage to much older men. It was an issue that the girls themselves had put forward to address, and their idea to create the skit and present it to the community. In the discussion that followed, it came to light that the girls were also victim to sexual assault on the crowded public buses from men who would fondle them at close quarters.

My heart was breaking for these girls, as in this culture it is usually seen as the girl’s fault if something happens, and very little recourse as the court system is virtually non-existent for this type of crime. One girl asked if Colorful Girls Circles would stand behind them if they reported something, and it was made very clear that yes, they could come to the facilitators with anything and it would be in confidence and they would be helped. This is so important for them to know as there is really nowhere else for them to safely turn.

At dinner that night, we all sat with Brooke Zobrist, the director of Girl Determined who had been with us on all our visits, and shared with her our thoughts on the programs we had seen. We were universally impressed with the quality of the content, the confidence shown by the girls, and their ability to articulate their thoughts and feelings. With over 2000 girls now active in Colorful Girls Circles across the country, it is clear that Girl Determined is making a deep and growing impact on the next generation of up-and-coming women leaders in Burma (Myanmar).

This is a long-term project, and true results may not be known for a generation, but the seeds that are being planted now are strong and fertile and are being tended with deep and loving care.

Nicki Maxwwell (Eugene, OR) and Helen Belletti (Falls Church, VA) serve the young nuns at a nunnery outside of Mandalay, Burma (Myanmar). Photos by Patricia Andersson.