Dining for Women’s grantees are located around the world, but many work in Africa, specifically West Africa. For
the past year, the burdens of recovery from war – inadequate infrastructure and the struggle for education, health care and in many cases, survival – have been increased by the fight against Ebola. 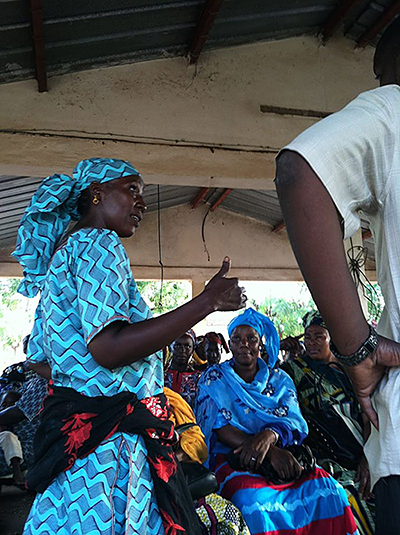 More than a year after Ebola was identified as the cause of an outbreak of illness in Guinea, the world is taking stock.

On March 2, 2015, Dr. Margaret Chan, director of the World Health Organization, speaking at an international conference on Ebola, said the crisis demonstrated the world’s vulnerability to emerging and epidemic-prone infectious diseases. Sierra Leone and Guinea continued to treat infected patients, even as the pace of the outbreak slowed.

While governments, medical providers and nonprofit organizations learned valuable lessons from the crisis, much work remains. Currently, two vaccines are being developed and tested in the hope that future outbreaks can be kept in check.

Dining for Women grantee Muso showed that Community Health Workers and the use of technology can help halt an outbreak by identifying the sick, providing rapid access to treatment and limiting their contact with others. In many areas of Mali where Muso works, access to health care is simply non-existent.

Contrast that with a report from Alyssa Rychtarik, Senior Program Advisor for The Grandmother Project, Dining for Women’s March 2015 grantee, who said Senegal remained largely unaffected by the Ebola crisis, due in large part to the quality of health care available. Even with enormous challenges, particularly in the area of maternal-child health, residents of Senegal still have the basic access to care needed to halt an infectious disease outbreak.

“In the town of Velingara, there is a district hospital with two doctors, one trained midwife and other auxiliary health care staff,” Rychtarik said via email. “In two of the towns – small towns – there are health centers, each with one well trained nurse or midwife and several trained birth assistants. In the 70 outlying villages there are 22 health huts where community health volunteers work. These huts provide some preventive activities such as distribution of malarial drugs, aspirin, etc. Periodically the district health team does vaccinations and prenatal visits at these health huts. Major health problems/issues in the area are high infant mortality, high maternal mortality, low vaccination rates of children 0 – 2 years of age, very low family planning coverage and 50 percent of deliveries in health facilities and 50 percent at home.”

The United Nations’ World Food Programme has joined forces with the World Health Organization to provide logistical support in Sierra Leone, Liberia and Guinea, the countries hardest hit in this most recent outbreak. Partnerships have sprung up across West Africa between NGOs, government agencies, nonprofits, UN branches and more – all working together to provide the expertise needed to end the outbreak.

Despite the response, nearly 10,000 people died from Ebola in this outbreak. Those at the forefront continue to spread the critical message that early treatment can save the life of the person infected, as well as the lives of others in the community.