Violence changed this child’s life, but won’t define it

We invited some of our programs that deal directly with violence against women to share some stories. The stories show the impact these programs are having fighting violence against women, addressing their root causes, and providing support and a way back for its victims. This is the story of a young Kenyan girl who knew the horrors of domestic violence at an extremely early age. Her mother was murdered by her father, who then abandoned Naanyu and her five siblings. Taken in by family, she is studying at the Kakenya Center for Excellence where she has learned that her life will not be the same as for others in her village. FGM will not be performed on her.

“I don’t know what happened to my parents.”

Like Nasieku, Naanyu is from Sikawa village. She is 13 years old and has three sisters and two brothers. She is the second youngest of her siblings. When Naanyu was very young, her life took a tragic turn.  In the heat of a terrible fight, her father murdered her mother.  He then fled from the village, and no one knows what has happened to him or where he is, though it is assumed that he is dead. Because she was so young when this occurred, Naanyu barely knew her parents.  All that she knows about them has come to her through rumors around Sikawa. 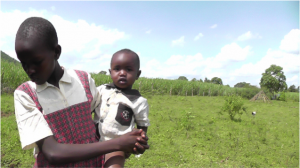 Since she was left without either of her parents, Naanyu’s uncles and her grandma took on the responsibility of caring for her and her siblings. She was raised primarily by her grandmother, who did her best to provide the six children with food, clothing, and adequate shelter. Naanyu grew to become a very bright, loving and sweet girl.  Because she was so young when she was orphaned, Naanyu does not feel that she was abandoned.  She has been surrounded by family members that support her and her siblings in their educational pursuits, even though they have extremely limited resources and income.

Naanyu came to KCE with full financial support.  She is now in the sixth grade. Because she is an orphan, Kakenya Center for Excellence covers all of her expenses, including school fees, uniform, toiletries, and school materials. She loves mathematics and dreams of becoming a doctor so that she can care for the sick and vulnerable. She is grateful for the knowledge she has gained as a student at KCE and recognizes that her life would be very different if it weren’t for Kakenya’s Dream.

“I did not know about FGM before I went to school, but I learned that it won’t be done to me,” she says.  “If I continue … my life will not be the same.”

Read more about how DFW’s programs fight violence against women