Dining for Women’s grantees are located around the world, but many work in West Africa. For the past year, the burdens of recovery from war, inadequate infrastructure and the struggle for education, health care and, in many cases, survival have been overshadowed by the fight against Ebola. In a three-part series, Dining for Women takes a closer look at this disease. In April, we focus on the basics. In May, we take a look at how a past Dining for Women grantee played a critical role in containing the outbreak. Finally, in June, we look at the current state of this outbreak. 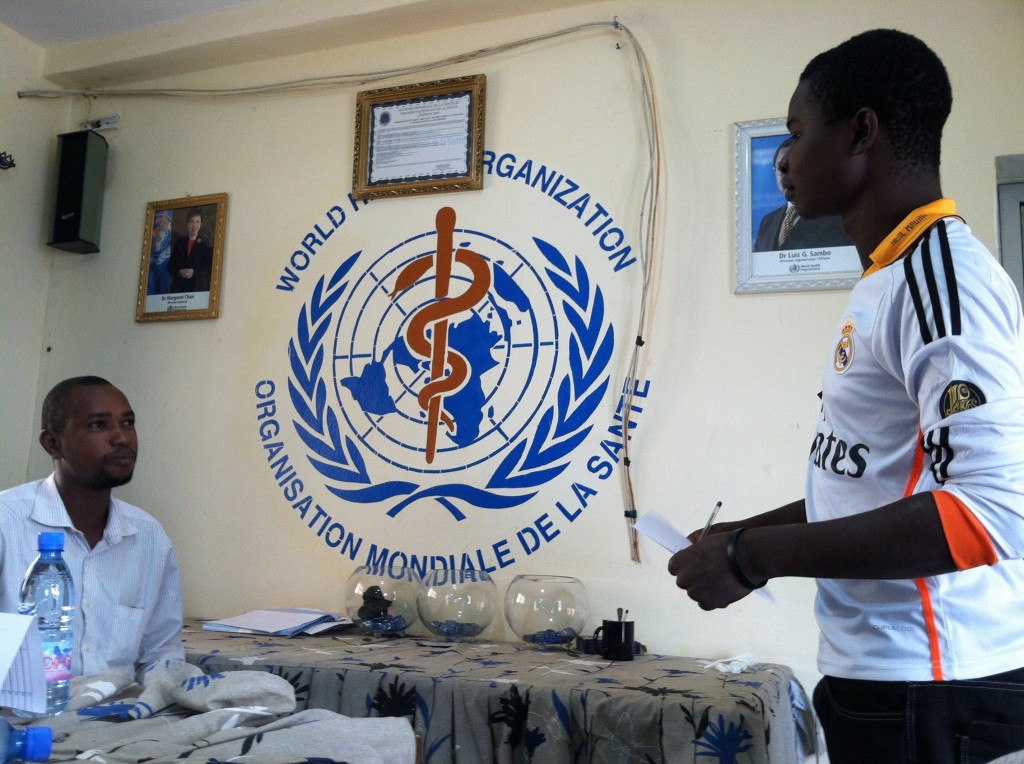 Ebola. Mere mention of the word is enough to strike fear in anyone – even those with access to a strong health care system, sanitary facilities and the best modern medicine has to offer.

Ebola is transmitted through direct contact with the bodily fluids of an infected person, including blood, vomit, urine, sweat and saliva. Health care workers are also at risk from needle punctures and other medical equipment used in the treatment of those infected with the virus. Ebola is actually much less contagious than an airborne virus such as measles, which is one of the most contagious viruses in the world, but the fear of Ebola is so great because its death rate is so high. As many as 25 to 90 percent of patients will die, depending on when and where they are infected, how quickly they are treated and the type of care they receive. In the current outbreak, the death rate has been close to 50 percent.

While outbreaks spread via human-to-human contact, they are thought to originate with contact with infected fruit bats or primates. The disease takes its name from the Ebola River in the Democratic Republic of the Congo, where the virus was discovered in 1976.

The current outbreak in West Africa was identified in March 2014 and is the largest and most complex Ebola outbreak since the virus was discovered. According to the World Health Organization, more cases and deaths have occurred in this outbreak than all others combined. It spread between countries starting in Guinea then spreading across land borders to Sierra Leone and Liberia, by air to Nigeria and by land to Senegal. Cases were reported in Mali and also in the United States, Spain and the United Kingdom.

The first case in this outbreak is believed to have occurred in December 2013 in an 18-month-old boy in Guinea. the World Health Organization (WHO) reports that he likely contracted the illness from wild animals, possibly bats that lived in a hollow tree near his home. The virus quickly spread through his family, then beyond, as a pattern of illness, death and funerals brought people in close contact.

By March 2014, the disease – not yet identified as Ebola – spread to Liberia and Sierra Leone. According to WHO, countries in equatorial Africa have experience with Ebola, suspect it in illness outbreaks and have a medical staff that is trained in infection control. In Guinea, Sierra Leone and Liberia, economic strains, including weak road systems, transportation and telecommunications, contributed to a delay in treatment and in communicating about the outbreak. Nigeria, Senegal and Mali all had swift responses to the outbreak and prevented widespread infection.

One year later, a number of countries have been declared free of the virus, while a few cases remain. (As of March 2015, Guinea and Sierra Leone were still reporting new cases. Liberia had one new isolated case.) According to the United Nations Secretary-General’s Special Envoy on Ebola, the outbreak affected approximately 23,000 people and resulted in close to 10,000 deaths.

Next month: How a DFW grantee took action to prevent the spread of Ebola.