Connections and Transformation in Senegal

When I received a call from Susan Anderson, a board member with The Grandmother Project (GMP), inviting me to travel with her to Senegal to see their work in action, I jumped at the chance. Patricia Andersson, inveterate traveler and trip leader, was up for the adventure too! CREATE!, another DFW grantee, was headquartered within several hours drive of the GMP office, so we were fortunate to be able to visit both organizations to see the projects we’ve supported with our DFW grants. 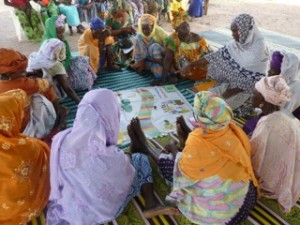 Visiting a DFW grantee is tremendously powerful because it brings DFW’s values of collaboration, inspiration, education, and transformation to life in a very real and deeply moving way. The women and girls are thrilled to meet us and to know that we represent over 8,000 DFW members who care about them. We convey our desire to connect with them and gain a deeper understanding of their lives, their challenges, their accomplishments, and their dreams. For me, personally, it’s fulfilling to know that the work we set out to do through our grants and partnerships – changing lives – is happening! I invariably reconnect on an even deeper level with DFW’s mission, so–no matter how far away I am from South Carolina–it feels like coming home.

The Grandmother Project was featured by DFW in March 2015. Our two-year grant for $44,500 to launch a leadership training program that enables grandmothers to become agents of change is being put to brilliant use. We observed one of the trainings on the second day of our visit, but I’ll get to that in a moment. On the first of our three days with GMP, we participated in a day-long ceremony called In Praise of Grandmothers, where village elders, district officials, and teenage girls come together to honor and lift up the grandmothers. There were speeches by elders and officials acknowledging the importance of the grandmother leaders in their villages and schools and testimonials by the grandmothers themselves acknowledging the importance of the training and the role they now have within their communities.

The second day with GMP we were able to observe one of the leadership training modules funded by DFW. When I asked one of the grandmothers how the training was helpful, she said, “It’s very useful for us. We gain knowledge, we meet together more often to find solutions to problems. We used to work individually. Now we are working together. There is increased solidarity between us.”

When I asked another grandmother what she has learned, she said, “Our motivation and commitment to do more has increased. We share ideas, learn from each other. We have a role as advisors in the community. The increased ties and increased commitment to collective responsibility for children strengthened relationships with teachers. Our increased confidence has given us the ability to go to teachers and share our concerns. Before, we were distant, even afraid of the schools. I wish I was young again so I could go to school.”

We heard from one young girl named Fatou that her father wanted to marry her off to an “immigrant” (a man who left the village to work in Spain). She was 14. The grandmothers came together and persuaded her father to let her continue in school and not marry.

We met with the Minister of Education in the Velingara District, several primary school teachers, and village elders–all of whom articulated the beneficial role the grandmothers have had in their communities by promoting and integrating appropriate cultural lessons in classrooms while advocating from within their villages and communities to change cultural practices that are harmful to girls. It’s a powerful model for change, and I love seeing grandmothers at the heart of it. 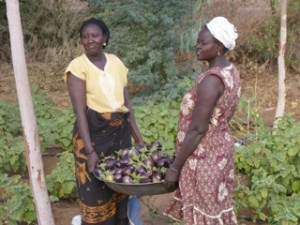 The second part of our adventure took us to visit seven of the eight sites where CREATE! (Center for Renewable Energy and Appropriate Technology for the Environment), featured by DFW in April 2013, has implemented its program. In all CREATE! sites, the objective is to “work with the community to install a solar-powered pump and gravity-fed irrigation system to access, store, and distribute ample quantities of free, potable water from a hand-dug well at the cooperative garden site; provide fencing, materials, tools, and training in sustainable year-round crop production in cooperative community gardens, using locally provided, non- GMO seeds, organic fertilizers, and compost; teach women and girls to build their own fuel-efficient cook stoves from free local materials, thereby reducing firewood consumption by at least 50 percent; teach women to plant and maintain fruit and nut trees for income generation; provide materials and training for a poultry-raising project; and conduct leadership training to support self-sufficiency for women and girls.”

Thieneba, the site where DFW’s grant was used, has seen eighteen months of progress. Most of the homes use the cook stoves, which drastically reduce the amount of firewood required for meal preparation (an entire meal can be cooked with two pieces of wood). They are free to build and can be built by the women themselves. We helped to build one in a few hours one afternoon! The garden site was filled with healthy vegetables and trees, and the poultry building had just gotten a new batch of little chicks! We observed one of the women’s savings groups meetings in action, too. 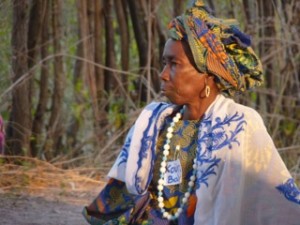 Every visit involved sitting with the women after they had finished watering (which they do twice a day), dancing, and talking (through the interpreters) to find out what the community gardens and cook stoves have meant to them. One of the most profound responses I heard was from a woman who said, “CREATE! is the first NGO we see ourselves in.” She explained that their village had tried to work with other NGOs (non-governmental organizations), but the models hadn’t worked. It was too hard to make money and pay the interest on the loans. Also, other NGO models involved the women working as individuals though the CREATE! model is collaborative. The women work together to make the gardens healthy and productive. One woman said that the family dynamics had changed because the women can earn money all year from the sale of the vegetables and poultry. It was clear that the gardens and cook stoves have been transformative in every village we visited. In fact, there is a waiting list of 40 villages that want CREATE! to come work with them.

The women were also very enthusiastic about the cook stoves. The amount of wood they need has decreased, and they can use a different kind of wood now. One woman explained, “we used to have to make big fires and so we needed big wood. Now we can use little sticks and we don’t have to go as far from the village to collect the wood.”

I’m so thankful I had the opportunity to visit these projects! I’m confident that the work we have invested in is being implemented and is well received by the beneficiaries. Thanks to Judi Abel, Founder of GMP and to Louise Ruhr, COO of CREATE! for making our experience so meaningful and productive.

The most profound gift of the trip was experiencing the joy of being with women whose lives are vastly different from my own but with whom I share so much. Even though we spoke different languages, the hugs, smiles, dances, and laughter connected us at the most basic level. We watered gardens together; we danced together; we shared meals together. We are women and that makes us alike in more ways than we are different. We are making a difference!