During the fall of 2015, I traveled extensively in South Asia co-directing Furman University’s India/Sri Lanka Study Away Program, which included 15 students and two faculty members. I made the most of being in South Asia by conducting site visits and interviews with five Dining for Women grantees: Emerge Global, The Unforgotten, Anchal, Matrichaya, and Vacha Charitable Trust, our featured grantee this month.

Being in South Asia is always exhilarating: the beautiful coconut trees and the breathtaking landscapes and forests, the heavy scent of tropical foliage, the crowded urban cities with people, people everywhere, and the delicious food. Traveling in South Asia is coming home for me; a sense of the familiar everywhere I look. I grew up in Mumbai and my ability to speak multiple Indian languages makes me feel at home everywhere in India.

My first site visit in early November was to Emerge Global in Colombo, Sri Lanka (DFW featured grantee in July 2011 and a current sustained funding grantee). Emerge Global works with girls who have survived sexual abuse and assists them and their children in seeking a new future. Emerge teaches the girls jewelry making skills, business skills, and life skills, offers mentorships and helps them reintegrate into society when they leave the shelters.

Alia Whitney-Johnson and Ellen Needham, co-founders of Emerge Global, and Mumtaz Faleel, country manager, spent more than two hours with me explaining the inner workings of EG, the backgrounds of the girls they served and their plans for the future. They took me to one of the shelters where we ate a lunch of rice and curry with our fingers. Later at the shelter, I spent time with the girls and watched them make beautiful jewelry. It was a delightful afternoon with the Emerge Global girls who clearly enjoyed their jewelry making. I left with a beautiful gift, a necklace that they had made, and several fond memories.

Later in November, in the city of Pune, in the state of Maharashtra, India I spent an afternoon interviewing the staff of The Unforgotten (DFW featured grantee in October 2013), which works with women waste pickers who live in the slums of Pune. The DFW grant to the Unforgotten has allowed them to support the education of 92 daughters of the waste pickers. In addition, 32 waste pickers receive training in business skills and microloans to help them leave the waste picking business. U.S.-based Executive Director Amit Kapadia, Project Manager Ratna Yeshwante and teachers Sweety and Shilpa spoke to the Furman University group. Shilpa grew up in the slums and is one of the DFW beneficiaries who now works for The Unforgotten. She spoke passionately in Marathi about her work in her community recruiting women and girls for the Unforgotten. We were then invited to visit the DFW beneficiaries in their homes in the Pune slums. Our arrival at the slums was quite a spectacle: a large bus full of visitors from the U.S. We split into groups and went from house to house visiting women and their families. The homes were densely packed together with narrow lanes separating one front door from another. Most of the inhabitants were from rural parts of Maharashtra who came to Pune looking for better paying jobs. Several had left unproductive agricultural land to be tended by other extended family members while they tried their fortunes in the city. All families had more than one family member who worked outside the home. In a city like Pune, the tiny one room home in the slum was all they could afford. We were invited into a home 10 feet by 12 feet where our host offered us food and drink. 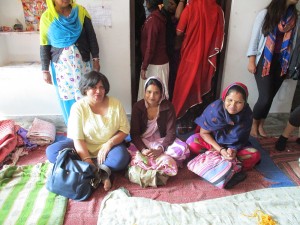 It was a long bus ride to Anchal from our location in Ranthambore, Rajasthan. Anchal (DFW featured grantee in October 2012 and a current sustained funding grantee) works with women who were former commercial sex workers or at risk for sex trafficking and teaches them skills in dyeing, quilting, financial planning, health, self-defense and offers them full-time employment with competitive wages.

There were at least 20 artisans working on their Kantha quilts when we arrived. Sitting with the artisans on the workshop floor, we shared tea, snacks and stories. While I interviewed the Anchal staff, the artisans spent time showing the Furman students how they made the Kantha quilts. The artisans and staff explained the process of procuring materials, which are recycled cotton saris, the training of artisans, the dyeing and the quilting. The students and faculty tried their hand at the quilting under the watchful eyes of the artisans. Later the artisans sang for the Furman group and the Furman group sang for them. It was an enjoyable visit of learning and sharing. The interaction with the Anchal artisans touched my students deeply and they have been talking about that visit ever since. 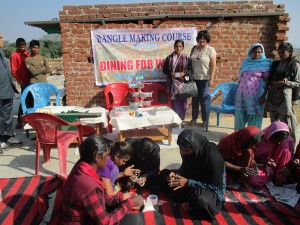 In early December, I flew to Ranchi in the state of Jharkhand to visit Matrichaya (DFW featured and sustained funding grantee over multiple years dating back to 2006). Matrichaya is run by its President Mrs. Chanchal Mishra, and the smooth running of this NGO is a labor of love for the extended Mishra family. DFW has been one of Matrichaya’s major funders through the years. Matrichaya serves women and girls in the surrounding villages by establishing Self Help Groups, providing vocational training, and supporting a local school. I spent two days visiting at least five different vocational training classrooms, the English Language classes and a health camp. The members of the Mishra family were gracious hosts, and no visit to the family is complete without a big Indian meal. I was treated to delicious rice and curries and breads and, as always, pressed to eat some more!! As I said my goodbyes, Mrs. Mishra handed me some gifts made by the women at Matrichaya and implored me to visit again.

Late in December when I was visiting my mother in Mumbai, I spent an afternoon with Vacha Charitable Trust (DFW featured grantee for February 2016). As I commuted to the Sanjay Nagar slum in Jogeshwari, I found myself on familiar roads. I grew up in Mumbai then left to pursue my Graduate Studies in the U.S. I had not dreamed then that, 28 years later, I would be in a familiar place conducting a site visit for DFW! 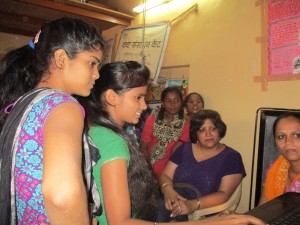 Vacha shares photographs and talks to Dr. Khandke about their photo project and advocacy projects.

In the midst of the tightly-packed tenements is a small community center where Vacha conducts its activities. The community center is a small, 15x 12 room that serves as a meeting space for all of Sanjay Nagar. It serves as a library and Resource Center and where Vacha has regular meetings and classes with the girls they work with. The girls were gathered there and we spent the afternoon discussing the projects they had been working on. Their parents were very supportive of them attending Vacha events. The girls showed me the posters they had worked on for their advocacy campaigns, and they proudly shared with me the photographs they had taken in their photography class. They asked me several questions too: they were curious about my background, my work in the U.S. and my family in India. I came away feeling that they will never regret their family’s decision to move from rural areas around Mumbai. They were aware of the options that the city of Mumbai offered them, but their lack of resources made negotiating these opportunities difficult. This is where Vacha came in, mentoring them through their schools and colleges and helping them find their inner voice. I would love to check in on all of them in a few years.

As I write this, the overwhelming feeling I have is that our DFW grantees all share several qualities: the founders, staff and volunteers exude courage, passion and a strong desire to bring change to their communities whatever the obstacles. The women and girls they work with are aware of the unique opportunities they are being offered to dream big, work hard and hope for the future. It is our privilege that we, the DFW family from so many miles away, are able to share this journey with all of them.

To see more photos of my trip, visit the Flickr album on DFW’s page here.