For chapters, For leaders, For members, News 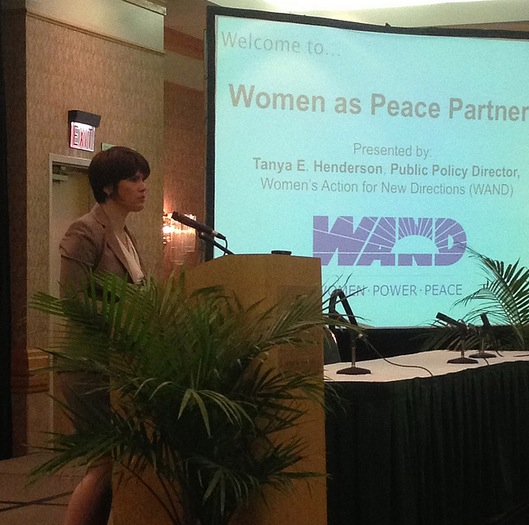 
The Women Peace and Security agenda’s goal is to empower women – representing half the world’s population – as equal partners in preventing conflict and building peace in countries threatened by war and violence.

It’s a broad goal, noted Tanya Henderson, public policy director for Women’s Action for New Directions (WAND), and some of the achievements of recent years have been hard-won through the efforts of WPS and other grassroots advocacy groups.

Efforts at national, international and UN levels recognize that the nature of conflict is changing. UN Resolution 1325, passed in 2000, stated that women’s participation was critical to a sustainable peace. Additional resolutions in ensuing years established women’s positions as “critical actors of peace”, established countries had an obligation to protect women and children in areas of conflict, and codified the concept that rape is a strategic tactic in war.

Why does this matter so much?

Henderson cited several examples – from Northern Ireland, Guatemala and Darfur – where women’s involvement in peace negotiations helped to incorporate a broader perspective and address areas like indigenous rights, housing and education, that would help ensure a more sustainable peace.

In 2010, on the 10th anniversary of the UN resolution, the United States announced that it would implement a national action plan. In making the announcement, Henderson said, “Secretary of State Hillary Clinton stated: ‘The only way to reduce the number of conflicts around the world and eliminate rape as a weapon of war, to combat the culture of impunity for sexual violence and to build sustainable peace is to draw on the full contributions of men and women in every aspect of peacemaking, peace keeping and peace building.’ ”

The US National Plan requires that the departments of defense and state both have implementation plans. “We are nowhere close to fully implementing it. We are really at the beginning, but that’s great because we get to ensure that the process continues.”

Currently, the National Action Plan (NAP) is administrative policy, which can be changed by the stroke of a pen by a future administration. So WPS is working to get that to become law and ensure that it is sustainable. (NB: HR 2874 was introduced in the House on July 31, 2013.).

WPS, she explained, works at the “grassroots and the grasstops” level. Grass tops is the policy level and ensures we have advocates at the top. Effective advocacy has to have both ends of the spectrum covered. “Otherwise,” she said, “we’ll continue building wells over and over again because we won’t have any impact at the top where long-term policy for clean water is being made.”

WAND has a network of 700 women legislators and decision makers to ensure we have a voice at the tables of power. One-third of women in elected positions are WAND members who advocate for these issues.