Join us for a look back at our two-week journey to mysterious, beautiful and troubled Southeast Asian country of Burma/Myanmar. 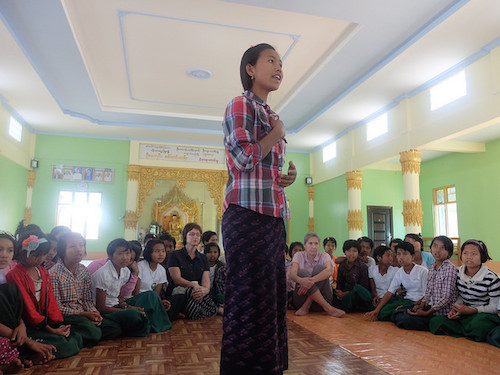 
While the itinerary of our trip followed the most common tourist route in this recently-opened Southeast Asian country, most of the activities we participated in were anything but touristy. Our journey centered around five visits with Girl Determined (supported in December 2012), where we were accompanied by Director Brooke Zobrist and her wonderful Burmese assistant and translator Diana. Brooke is passionate and articulate, and provided a framework for us to understand the challenges faced by the adolescent girls whose Colorful Girls Circles (Girl Determined’s centerpiece program) we visited. She also shared with us how DFW’s funding had come at a very critical time for Girl Determined, how grateful they were for the two-year grant, and how happy it made her to share the successes of the program with those who had supported it during that juncture.

The highlight for most of us was the whole day we spent with Girl Determined in a small rural village outside of Mandalay. And the highlights from that whole day were the visits we took to the girls’ homes. Split into pairs of travelers and accompanied by a translator, small groups of girls took us through the village and into their thatch-roofed houses, where many mothers had prepared snacks for our arrival. To say we were treated as celebrities is an understatement.

This is a village that doesn’t see tourist traffic, and we were quite the diversion: at one home neighbors from every side came pouring in to see these Western women in person. In my experience, I asked every mother I encountered what her hopes were for her daughter. Each one replied unvaryingly, “for her to be educated.” Mostly uneducated themselves (even now Burma/Myanmar only mandates school through the 4th grade), they know that education is the only hope for their daughters to have a better life than they have themselves.

Rounding out our understanding of the variety of circumstances in which Girl Determined operates, we visited Colorful Girls Circles in three other locations. One was at a monastery, where the girls live as novitiate nuns, not allowed to participate in outside life and therefore ill-prepared to make it on their own if and when they choose to leave at 18. Colorful Girls Circles gives them the tools they need to be able to advocate better for themselves. With this group, we all participated in an art project led by one of our travelers. Another visit took place at a large urban school educating 7,000 children. During this visit, we joined the girls in a typical Colorful Girls Circle meeting, getting to experience exactly how the circles are structured and how the topics (in our meeting, religious tolerance, and creating a friendly atmosphere) are addressed. A third visit was at a monastery school that taught village children as well as the novitiate monks and nuns. At this meeting we were treated to the re-enactment of a skit the girls had developed to address domestic violence. Earlier in the trip we had also had a picnic together with girls that had been transported into Yangon from various suburbs of the city, where we were able to talk and ask mutual questions of each other in small groups.

What was nearly unanimous in the girls’ reporting of their experiences with Colorful Girls Circles is that it developed in them an ability to speak out for themselves and to their parents, and to be able to share in the circles their experiences of being an adolescent girl. They highly appreciated having a place where they could discuss topics such as menstruation, gender discrimination, and in some cases, abuse. Where they would be listened to and valued, and learn to value themselves. To understand that girls and women could be leaders, and that this was a desirable trait. To have Circle facilitators who modeled this, and who created girl-centered experiences instead of the standard teacher-centered education — which consisted almost entirely of rote memorization and group repetition. 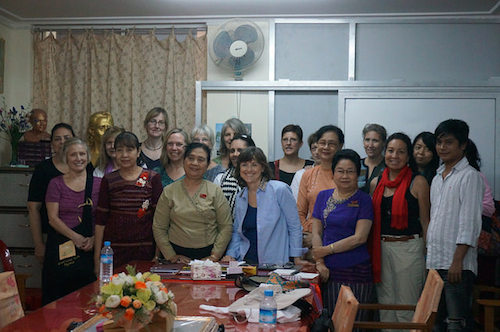 We all walked away with the understanding that Girl Determined was an important — perhaps critical — piece in bringing Burmese women to a place of greater equality both within the home and within a future government structure. For this is a project that is not short-term, and that may not bear its greatest fruit for another generation. For some girls the Colorful Girls experience will lead to a break-out into a bigger life, perhaps a successful career instead of a village wife and mother. But for most, it may still lead to the life of a village wife and mother, but one who values her daughters, models equality, speaks out within the family structure, and provides all the experiences possible for her daughters. And in that generation is where true change may be seen on a larger level. With 2,000 girls taking part in Colorful Girls Circles right now out of a Burmese population of 55 million, one may be tempted to call this potential change a drop in the bucket. But as the country has seen through the galvanizing force of opposition leader Aung San Suu Kyi, the influence of one strong woman cannot be overstated.

With these hopes for the women in a country facing so many challenges, we had a context for our other activities — from horse-drawn cart rides in the pagoda-filled and fascinating town of Bagan, to longboat rides through beautiful and peaceful Inle Lake. A tasty cooking class, day-long village trek, and meetings with other influential Burmese women rounded out our experience, and we were all filled to the brim with impressions and insights by the time we bid each other goodbye, new friends made, new understandings of the world to be assimilated and shared.

View all the blog posts from this trip

Featured photo:  Nicki Maxwell (Eugene, OR) chats with three novitiate nuns that take part in a Colorful Girls Circle at their nunnery home in Yangon, Myanmar.

Photo top:  A young woman member of Colorful Girls Circles speaks clearly, passionately — and in English — about her challenges growing up in rural Myanmar.

Photo bottom: Our travelers visit the offices of the National League for Democracy.